(This content was originally published as an Action Alerts PLUS Alert on Sept. 30, 2016. Stock prices, shares held and portfolio positions may have changed.)

Shares of NXP Semiconductors (NXPI) are marching higher in today's session -- now trading 30% above our around $79 cost basis -- following Wall Street Journal reports that Qualcomm (QCOM) is in talks to acquire the company over the next two to three months. We would never offer certainty around takeover speculation, but regardless of the outcome, we view the situation as a seminal moment for both NXP and its shareholders. The newfound attention on a previously overlooked name illuminates the tangible value underpinning NXP's business model. We reiterate the One rating and $110 price target held since initiating on the name earlier this year.

Before we delve deeper, we want to offer members both analysis and reflection on a holding that we have been pounding the table on since unveiling our thesis on our first-quarter 2016 Chairman's Club conference call in late April -- and initiating in the portfolio the following week.

NXP is a lesson in conviction. We introduced it into the portfolio with $110 price target given: "1) the company's outsized market leadership across a diverse range of end markets (notably in autos, secure identification, and communications); 2) continued market share gains (based on a track record of growing 50% faster than the industry); 3) cost and revenue synergies driven by 2015 merger with Freescale; 4) industry-high free cash flow growth trajectory, 100% of which should be returned to shareholders; 5) relative undervaluation."

Our thesis is unchanged, and empowered by the company's recent results. For a full redux of why we love NXP, refer to our white paper two months back, which provided context and strategic insight into how the company has quietly created $30 billion in value since its 2010 IPO at $14 a share.

NXPI has been our top- ranked value stock each month since introducing it into the portfolio. Importantly, we have maintained our high conviction even in times of doubt, adding the name (and recommending when we were restricted) multiple times below $80 -- notably in the mid-$70s, post-Brexit.

As it relates to the potential takeover, we expect negotiations to be rigorous and would be surprised to see NXPI accept a bid under $115 a share. Although Qualcomm's management team would likely come in at a low offer -- we have heard reports of $95 -- the reality is Qualcomm needs NXP more than NXP needs Qualcomm. While it is normal to see the takeover target spike (NXPI is up 27% since reports), a double-digit rally in shares of the potential acquirer (QCOM is up 11% since reports) is as rare as it is powerful.

In plain English, Qualcomm shareholders are telling management to get the deal done. The strategic fit could not be clearer: NXP represents a rare opportunity for the lumbering Qualcomm to transform its business model, diversify away from the low-margin, low-growth smartphone market and towards high- margin, high-growth, highly lucrative end markets across auto, secured devices, connectivity and secure payments (see figure, below, for QCOM's pre- and post-deal revenue breakdown).

Beyond all fundamentals, the intangible is NXPI's nearly two-decade relationship with China: NXP has relationships at the highest national levels and at the provincial level. The company collaborated with China five years ago in order to bring secure, contactless payment transactions to the country (both plastic and mobile, i.e. Apple/Samsung Pay). The move proved pivotal, as it cemented trust from regulators, banks and influencers (such as China UnionPay). In fact, the company just announced it has collaborated with smartphone maker Xiaomi to provide a secure mobile payment solution for transit, replacing traditional magnetic swiping with a contactless solution (Apple Pay for transit) for Xiaomi's 200 million active users.

NXP's motive? With the company's acquisition of Freescale last year making it the largest chip supplier to auto companies, it is increasingly being viewed as a dual, chip-and-auto player (via leadership in safety, security, infotainment, computing and networking, and with the most important advantage being its security leadership -- with a full-suite ecosystem, per the images, below). 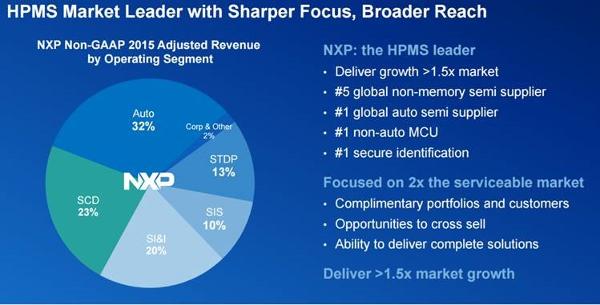 However, NXPI does not conform to the typical chip framework and does not fit neatly within sellside analyst coverage (as semi analysts are not in tune with the auto market, and vice versa). Additionally, NXPI doesn't reach the typical portfolio manager's radar, as the company doesn't market itself -- outside of rare appearances on Mad Money,. This allows it to stay below the radar in order to innovate with surgical precision, and ultimately drive shareholder value. In the end, both the Freescale and NXPI teams have worked tirelessly to get where they are today, and with frustration mounting over the lack of recognition of their true value, a sale makes strategic sense in order to drive the most value for shareholders.

We expect $115 to $120 to be the potential takeover target, minimum. This is based on intuition -- given the company leadership (with whom we have built strong relationships over the past two and a half years), relative growth (growing 1.5x the next-largest player), and CEO Rick Clemmer's shrewd discipline as a dealmaker (prior to NXPI, he sold his company for a 130% premium). A finalized deal will take some time, but NXP's high margins and robust free cash flow generation fit neatly into QCOM's dividend needs. Management's proven ability to operate at high margins with best in class return on invested capital also affords a cushion for premium and accretion long term.

As we mentioned in our early August bulletin, although NXP has transcended the norm and created a diversified portfolio with leading positions (it is growing at least 50% faster than peers in each of its divisions), the fact that it continues to trade like a commoditized smartphone or computer chip provider "simply does not make sense, considering the company's recent blowout quarter, major synergy potential, operational leverage and strengthened competitive positioning."

We are finally seeing common sense kick in, albeit faster than we anticipated. NXP's proper recognition has been a long time coming. We expect shares to trade in unpredictable fashion if, and until, a deal actually is secured, as neither side will be able to comment in the interim. We recommend members who did not trim some of their shares do so now (we trimmed one-third of our position for a 20% gain following the report to lock in a portion of profits) and anyone else holding the name to stand pat. We are in this for the long run, as always. And as always, our thesis is unchanged. The market has simply awakened.