As we like to do from time to time, we want to take a moment and integrate some charting analysis for members to provide a different look at the markets. While Action Alerts PLUS focuses primarily on analyzing stock fundamentals, it never hurts to look at the charts of stocks to gain another perspective from time to time.

Before we dive into Nvidia's (NVDA) chart, however, we want to first discuss the company from a fundamental side and include thoughts from a Morgan Stanley research note we came across that helps explain part of the stock's solid outperformance on the day. But first, there were data reports floating around last week suggesting that demand for Nvidia's premier graphic cards has come down, most likely due to waning demand in the crypto-market but possibly due to the gaming market as well.

Analysts at Morgan Stanley refuted this in a note on Tuesday, though, suggesting that the negative data points are "largely backward looking" and a channel pullback is "normal" ahead of a new product launch (Turing) that is expected in late August. And while some have called out Nvidia for possibly losing share to fellow gaming chipmaker Advanced Micro Devices (AMD) , Morgan Stanley thinks Nvidia can take back share (the gaming market is big enough for both, in our view) thanks to factors including the introduction of new products based on Nvidia's Turing architecture, lackluster demand for AMD's competing architecture, and minimal competitive response from AMD over the next 12 months.

All in all, our long-term view is on NVDA is unchanged, and we continue to view any weakness on noisy-type news as an opportunity to buy. Our thesis relates to Nvidia's integral role in several secular themes such as gaming, the data center, and autonomous driving.

As for some recent developments here, gaming continues to impress, and concerns are likely overblown as we expressed above. Also in Morgan Stanley's note, the analysts mentioned that during a recent meeting with CFO Colette Kress, she expressed confidence in data center market share.

As for autonomous driving, Nvidia recently secured partnerships with Daimler and Bosch to test the Nvidia Pegasus platform on robo-taxi fleets, another example of how Nvidia is leading the way in this breakthrough technology.

Now let's look at Nvidia's chart. Below you will find the chart and commentary from Bob Lang, the brilliant technician in the two-man team behind TheStreet.com's Trifecta Stocks newsletter (which can be found here). Here is what Bob has to say about the chart of Nvidia.

"The chart of NVDA is constructive here, a nice pattern of higher lows since the bottom fell out in February. Since then a couple of strong earnings reports but the stock has been largely walking in place. We believe this is just the calm before the storm, that storm being higher prices up toward the 300 area. It won't get there in a day of course, but we see improved RS (top pane), strong price action, the breakout from the cup/handle (a very reliable bullish chart pattern) and solid money flow continues (tells us institutions are big buyers of the name). That top in June looks formidable, but this is a momentum stock, and if we know our history - don't bet against it!" 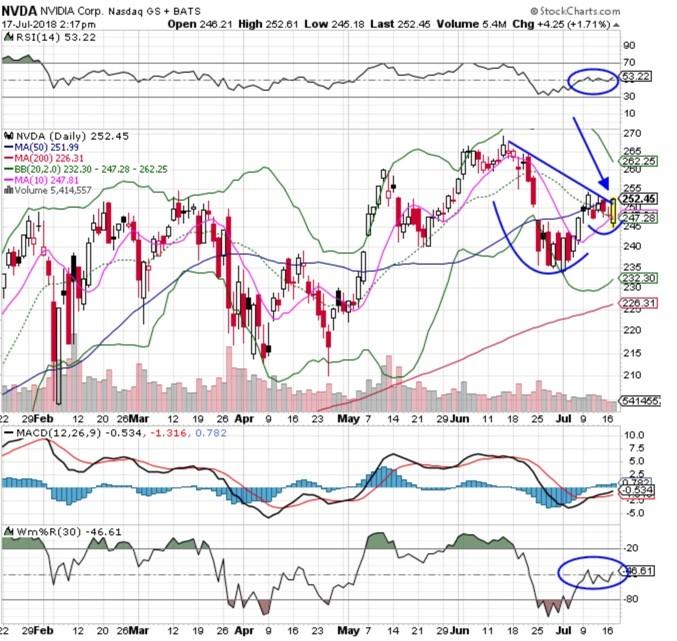