On Wednesday, shortly after the closing bell, PayPal (PYPL) reported a top- and bottom-line beat with its fiscal second-quarter earnings release. On the top line, revenue of $3.857 billion (+23% YoY) exceeded expectations of $3.812 billion, leading to a slight beat on the bottom line as adjusted Earnings per share of $0.58 (+28% YoY) outpaced the $0.57 per share consensus.

Given the pullback, we want to reiterate Jim's comments from his Daily Rundown on Tuesday, when he noted, "I think that [Dan ]Loeb [of Third Point] buying the stock and taking a position and saying that things are better is not a reason to buy." We note this because despite the move lower, shares are now essentially where they opened to start the week, before rumors of Loeb's position were confirmed. So, rather than view this pullback as a change in investor sentiment, or a negative read on the quarter, we are more inclined to simply interpret the move as weak hands coming out of the stock. As Jim also noted on the same Rundown, "people are really too excited, you'll probably get a chance to buy it lower."

Before digging into the quarterly results, we want to take a moment to review some of the M&A activity from the quarter as the company put a significant amount of capital to work over the past three months. In May, PayPal announced the acquisition of iZettle for $2.2 billion. The acquisition is expected to close in the current quarter (3Q18) and expand the company's in-store presence. Also in May, the company announced and closed its $16 million acquisition of Jetlore, "an AI-powered prediction platform used by some of the world's top retailers" that will help to enhance and accelerate the company's Marketing Solutions thus boosting its value proposition to merchants. In June, PayPal announced two additional acquisition, Hyperwallet, which is expected to close in the fourth quarter, for $400 million and Simility, which closed in July, for $120 million. With Hyperwallet, "PayPal plans to enhance its payout capabilities, improving its ability to provide an integrated suite of payment solutions to ecommerce platforms and marketplaces around the world." As for Simility, the move was made in effort to bolster the company's "ability to deliver fraud prevention and risk management solutions to merchants globally." 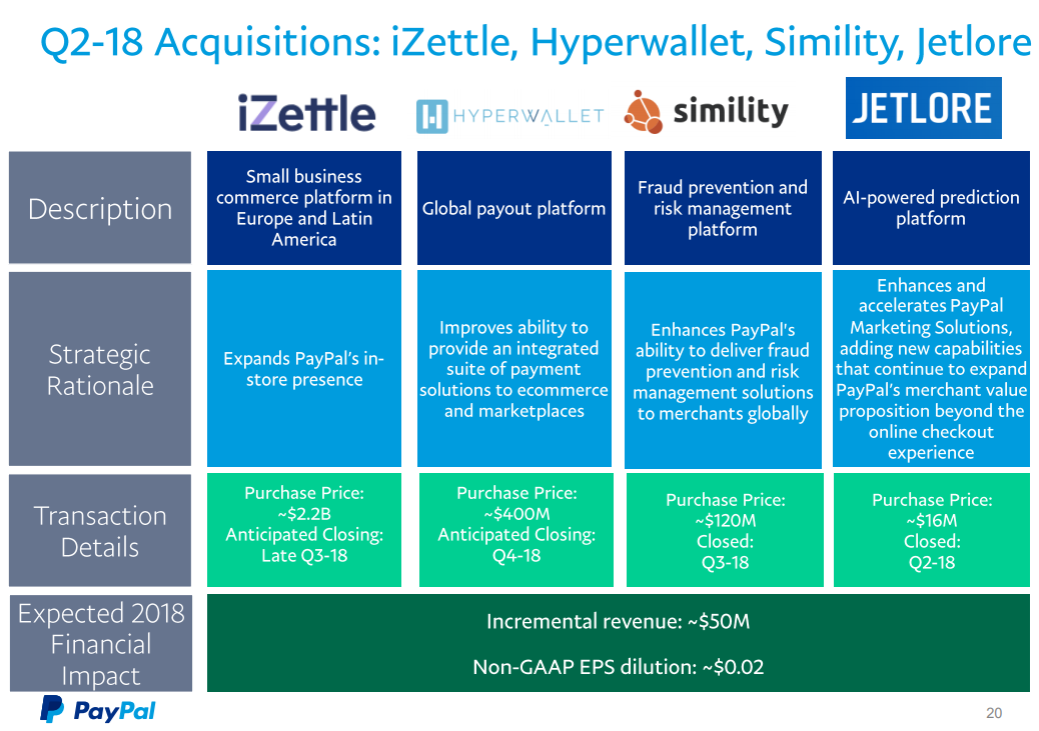 Moving to the quarterly results (annual growth rates stated on a FX-Neutral basis), total payment volume (TPV) of $139.4 billion (+27% YoY) were a tick below expectations of $139.43 billion. Making up this key metric, Merchant Services TPV grew 30% YoY and is now responsible for 88% of overall TPV, up from 86% in the second quarter of last year with eBay Marketplaces volume increasing 6% YoY. Additionally, Person-to-Person (P2P) payment volumes (including core PayPal, Venmo and Xoom) increased to over $33 billion, representing roughly 24% of TPV (up from 21% in 2Q17), with over $14 billion being processed through Venmo, representing a 78% YoY increase for the platform. 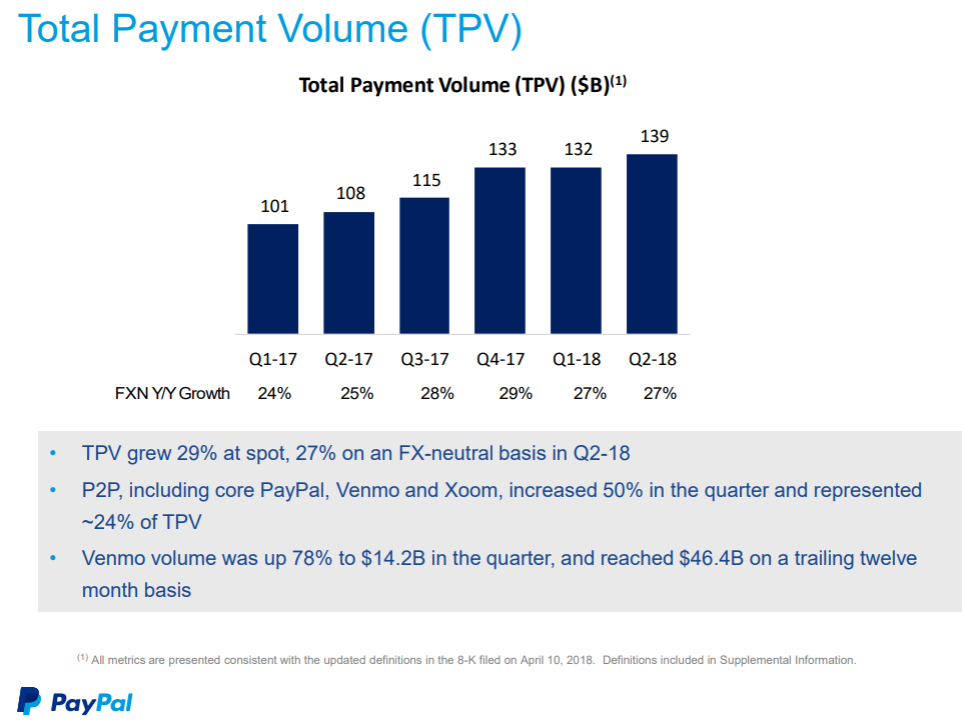 Looking at overall mobile performance, PayPal processed roughly $54 billion in mobile payments for the quarter, roughly 39% of overall TPV and representing an increase of 49% from the same time last year. Regarding Venmo monetization, COO William Ready noted on the conference call, "we're certainly still in the early innings there for sure," calling out several highly popular mobile platforms that have recently added a dedicated Venmo button such as Uber/Uber Eats, Eat24, Grubhub and Seamless while noting, "there's a great pipeline of those adding in dedicated Venmo buttons." 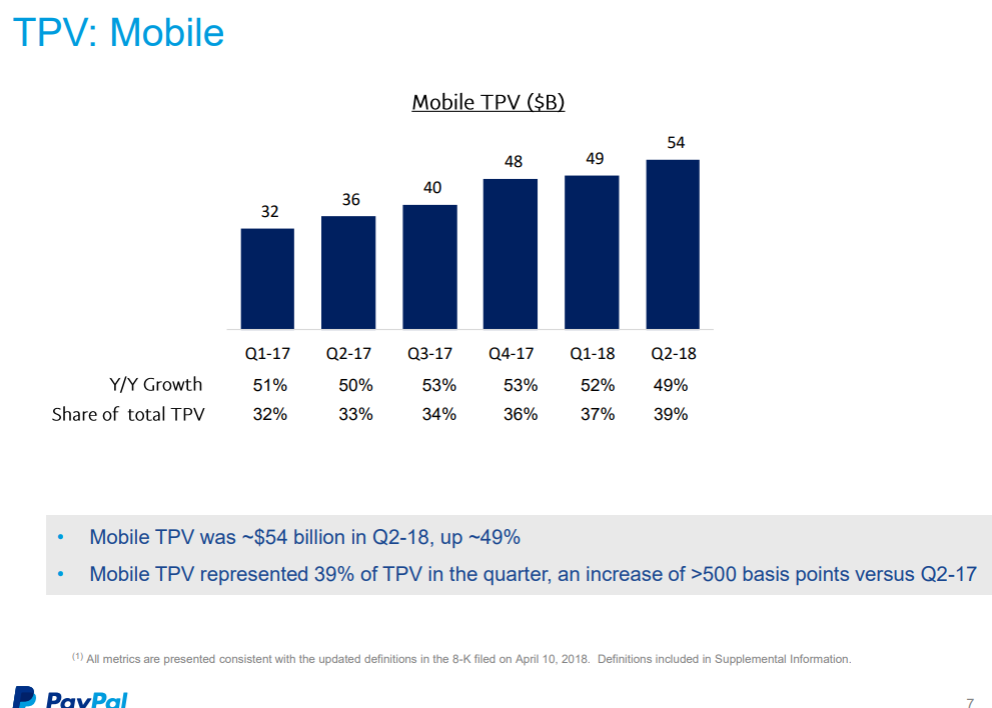 As for the company's "take rate" (total revenue divided by total payment volume), a key profitability metric for payment processors, at 2.77% it slightly outpaced estimates of 2.74%, however, it is down 14 bps from the same time last year as result of growth in P2P payments and "$42 million headwind from hedging losses relative to last year," which combined, are responsible for roughly 70% of the YoY contraction.

Other quarterly highlights include a 7.7 million increase in active accounts (+18% YoY) and 2.3 billion payment transactions (+28% YoY) with an average of 37.5 payment transactions per active account on a trailing 12-month basis (+9% YoY). Regarding the momentum of user engagement, during the company's conference call, CEO Dan Schulman noted that the company added 16 million net new active users in the first half of the year and is "on track to do over 30 million in 2018," which if achieved would 2017's record setting result of 29 million net new actives. 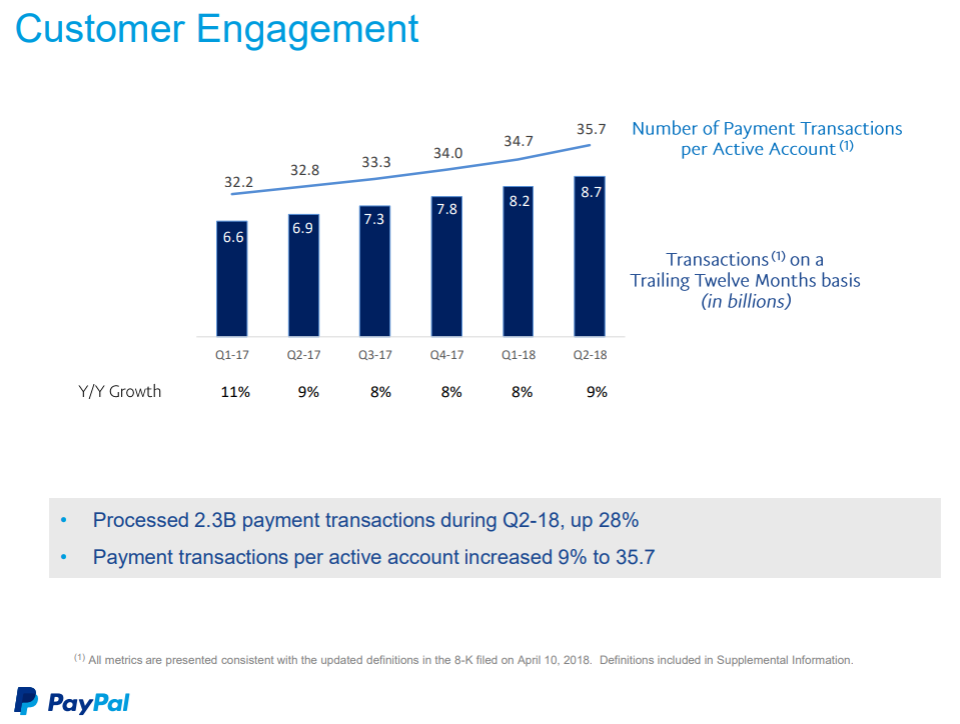 All in, we believe the quarter to be largely in line with expectations and reaffirm that the post-earnings selloff is simply hot money -- that was only in the name because of news that Dan Loeb had taken a stake -- coming out of the stock. We believe the results support our thesis that Venmo has plenty of monetization runway ahead of it and that the digital payments space will only become more pervasive as online shopping and mobile app payments increase in popularity. Moreover we continue to believe that the company's M&A activity in the quarter places it on a strong path toward increasing its brick and mortar footprint, making it more competitive against peers such as Square and increasing its value proposition to both buyers and sellers alike thanks to enhanced marketing and fraud detection capabilities. We are currently reviewing our price target and reaffirm our Two rating.

For members interested in digging deeper into the quarter, we have provided the necessary links below: