Following up on our coverage of CVS (CVS) , analysts at Cowen released an updated analysis this morning in which they discuss two headwinds the company called out for fiscal year 2019 when management presented at the JPMorgan Healthcare conference last week, namely, rebate guarantees related to the company's pharmacy benefits manager (PBM) business and Aetna's experience rating. 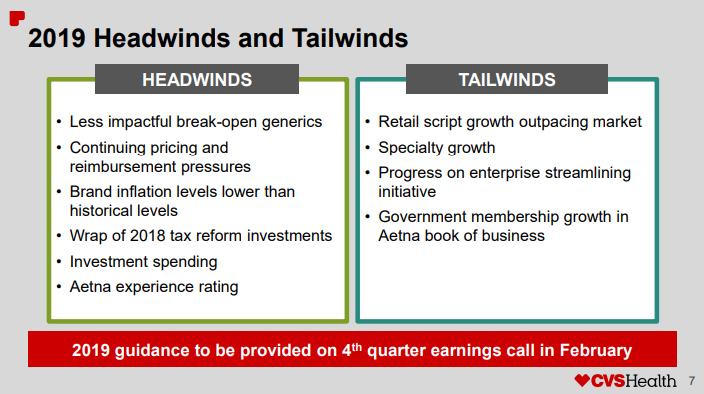 As a reminder, while speaking about headwinds at the conference, CEO & Director Larry J. Merlo stated, "we also expect brand inflation to continue to moderate this year, which would impact client commitments in the PBM business as we have guarantees related to the level of rebates we provide." Regarding the Aetna acquisition, he noted, "given the experience-rated nature of our large group commercial insured and group Medicare business, we expect some of Aetna's strong 2018 performance in those businesses to be reflected in pricing for this year, 2019."

With that in mind, on a more positive note, the analysts went on to say, "although we expect rebate guarantees to be a headwind in 2019 and 2020, our analysis indicates that this headwind will dissipate in 2021 and beyond, as long as brand inflation levels stay in the mid-single digits, as the contracts signed in the 2017 and 2018 selling seasons roll off or are renewed," adding that the negative impact seen in share price since the disclosure of the headwinds likely indicated a larger negative impact than their analysis would imply, i.e. the headwinds are not as big as many may have fear.

Regarding the Aetna experience rating related headwind, the analysts provided a more clear understanding of the dynamic noting, "better medical cost experience [Aetna's large group experience rated book outperformed in 2018] will be passed back to customers through pricing in 2019, representing a headwind in 2019 as margins normalize." The analysts expect this headwind to result in a $0.07 impact to adjusted 2019 earnings.

Despite these headwinds (and the one's not specifically called out in the note), the analysts who reiterated their Outperform rating and $103 price target (versus ours at $95) expressed optimism going forward stating, "we're encouraged by the greater clarity mgmt provided us of its strategy going forward. CVS outlined the portfolio of five programs it intends to deploy into the market to drive longer-term medical cost savings." 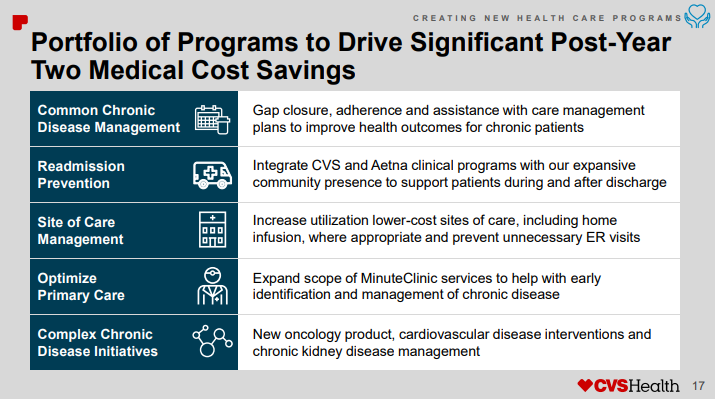 Bottom line, while the analysts did reduce 2019 and 2020 adjusted earnings estimates, they maintained their, $103 target based on their own discounted cash flow analysis, noting that their target implies a roughly 13.7x p/e multiple based on 2019 earnings of $7.50 per share. And while our own target is slightly more conservative at $95 per share (representing just under 13x average analyst 2019 earnings estimates of $7.44 per share), we believe this to be a more than fair, if not overly conservative valuation considering that Aetna represents roughly one-third of the new company's expected operating profit (legacy CVS representing the other two-thirds).

Compare this to a pharmacy pure-play such as Walgreens Boots Alliance (WBA) , which trades at a forward p/e multiple of just under 11x and a managed healthcare pure-play such as UnitedHealth Group (UNH) , which trades at just under 17x forward earnings and it becomes even more clear how cheap shares currently are at less than 9x FY2019E earnings per share. Lastly, while would we note that a large part of the discount can likely be attributed to the debt load resulting from the acquisition and associated integration risk, we believe there in lies the opportunity for those patient enough to let the story play out.