Tuesday morning, before the opening bell, JP Morgan Chase & Co. (JPM) reported a rare top and bottom line miss with its fiscal fourth-quarter 2018 earnings results. On the top line, total managed revenues of $26.8 billion (+4% YoY), missed expectations of $26.84 billion. On the bottom line, diluted earnings per share of $1.98 (+85% YoY), disappointed versus estimates of $2.20 per share.

However, despite the top and bottom line miss, the bank's interest-rate spread held firm at 2.24%, resulting in a net yield on interest-earnings assets (net interest margin or "NIM") that was in line with expectations at 2.54% (+12 bps YoY).

On the release, Chairman and CEO Jamie Dimon stated, "2018 was another strong year for JPMorgan Chase, with the Firm generating record revenue and net income, even without the impact of tax reform. Each line of business grew revenue and net income for the year, while continuing to make significant investments in products, people and technology, demonstrating the power of the platform. We grew core loans 7%, in-line with our expectations, while maintaining credit discipline and a fortress balance sheet with significant capital and liquidity."

Looking to several key bank-wide metrics, on a managed basis (which makes for an apples-to-apples compare versus estimates), JPMorgan reported an overhead (or "efficiency") ratio (operating expenses/revenue) of 59% (+100 bps YoY), missing expectations of 68% (recall, on this front, lower is better as it essentially indicates the cost of revenue.

Return on tangible common equity (ROTCE) came in at 14% (+600 bps YoY), missing expectations of 16.1% while the bank's common equity tier 1 (CET1) ratio, which compares core equity capital to total risk-weighted assets and is a measure of financial strength, came in at 12.0%, in line with expectations, firmly above the Fed's required 4.5% minimum and indicative of a strong financial position that provides room for additional business investments, shareholder returns and a solid buffer against an economic downturn.

Lastly, the bank's tangible book value per share (TBVPS), which is a measure of book value less goodwill and other intangible assets, came in at $56.33 (+5% YoY), slightly above expectations of $56.13 and up from $53.56 in the same period last year.

On the capital return front, JPMorgan returned a total of $8.3 billion to shareholders with $5.7 billion coming in the form of share buybacks and the remainder via a common dividend of $0.80 per share.

Within the Consumer & Community Banking division, a bright spot on the release, revenues of $13.695 billion (+13% YoY) outpaced expectations of $13.326 billion, leading to segment income of $4.028 billion as average loans and core loans were up 2% and 5% YoY, respectively. Also driving the top line was 3% YoY increase in both average deposits and client investment assets. Active mobile customers also increased, advancing 11% from the same period last year as the bank continues to invest in new technology.

However, slightly offsetting the rise in revenue, expenses increased 6% YoY on the back of business investments, and higher auto lease depreciation that was only partially offset by lower FDIC charges and expense efficiencies.

Per the release, results within Consumer & Business Banking were "predominantly driven by higher net interest income as a result of higher deposit margins and balance growth."

As for Home Lending, the division was hampered by "lower net production revenue on margin compression and lower volumes," i.e. a slowdown in home-based loans (think mortgages) that was compounded by contraction in interest rate spreads that led to margin compression. This comes as no surprise given both the housing supply tightness we saw throughout 2018 and the decline in mortgage rates seen in the two months of last year. 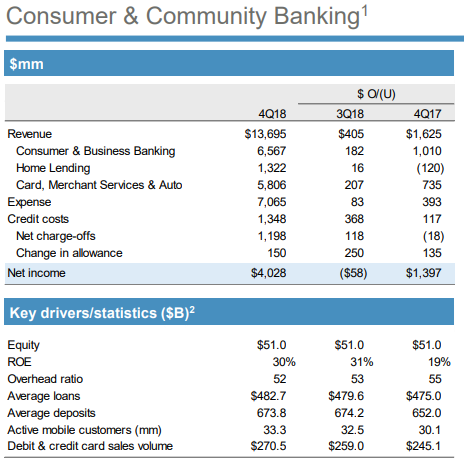 Moving on to Corporate & Investment Banking, the clear disappointment that dragged down nearly all other aspects of the release, revenue of $7.237 billion (-4% YoY) sorely missed consensus of $8.024 billion and resulted in net income $1.975 billion (-15% YoY). Breaking top-line revenue down further, the bank saw an increase in Banking revenue to $3.281 billion (+6% YoY) more than offset by a decrease in net revenues from Total Markets & Investor Services to $3.956 billion (-11% YoY).

As for Markets & Investor Services, almost all of the quarter's weakness can be traced back to this one sub-segment as revenues fell to $3.956 billion (-11% YoY). Digging deeper, the weakness can be attributed to poor performance in Fixed Income Markets as revenue fell to $1.856 billion (-16% YoY, - 18% ex-TCJA), as "challenging market conditions produced revenue declines in Credit Trading, Rates and Commodities, which were partially offset by strength in Emerging Markets." Equity Markets revenue performed more favorably, advancing to $1.317 billion (+15% YoY, +2% ex-TCJA) driven by " continued strength in Prime." Securities Services revenue grew to $1.026 billion (+1% YoY) thanks to "fee growth and higher interest rates, predominantly offset by the impact of lower market levels, and a business exit." Lastly, Credit Adjustments & Other saw a loss of $243 million "reflecting higher funding spreads on derivatives." 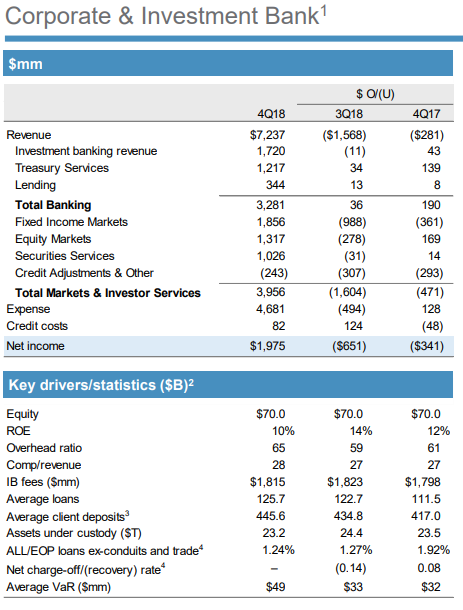 Commercial Banking revenues of $2.306 billion (-2% YoY) outpaced expectations of $2.297 billion, leading to $1.036 billion in net income. Driving the annual decline was "lower non-interest revenue more than offsetting higher net interest income." The pullback in non-interest revenue "was largely driven by the absence of a benefit in the prior year as a result of the enactment of the TCJA, while higher net interest income reflected higher deposit margins partially offset by lower loan spreads."

Within the segment, Asset Management revenues came in at $1.723 billion while Wealth Management revenues came in at $1.716 billion. Additionally, assets under management decreased to $2.0 trillion (-2% YoY) "driven by the impact of lower market levels, which were largely offset by net inflows into liquidity and long-term products." This is important as it indicates that the lower levels were not driven by clients withdrawing their money and simply due to the decline we witnessed at the end of last year. 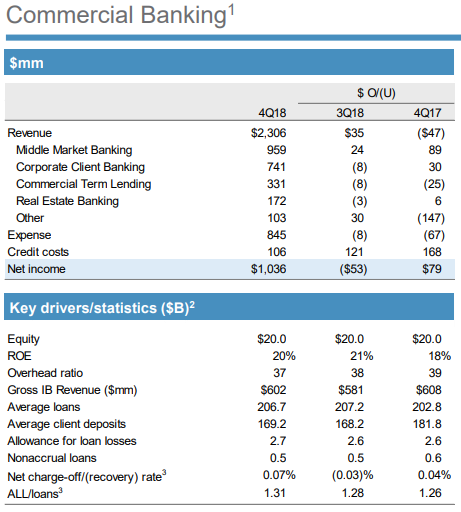 Our View After the Results

All in, while the headline print was clearly disappointing, we view the fact that almost all of the miss can attributed to weakness in trading, a trend that impacted the entire industry due to a particularly weak end to 2018 that saw low volumes in the last three weeks of December, to be encouraging and therefore believe this quarter to be more of a one-off even than the start of a trend. Recall, we called out this same weakness yesterday, in our alert on Citigroup's (C) earnings (here), where we stated that, "Citi's trading operations (specifically in Fixed Income) was the main source of this quarter's total revenue shortfall."

That said, we would call out that one headwind worth noting (in addition to the ongoing U.S./China trade dispute and the impact it is having on global growth), that was called out by Dimon and CFO Marianne Lake, is the ongoing government shutdown. Speaking to reporters, Dimon stated, "Someone estimated that if it goes on for the whole quarter, it can reduce growth to zero." Additionally, while Lake noted on the conference call that IPO and M&A activity could also be impacted due to delays in receiving necessary government approvals, she told reporters that the bank is "less concerned about the direct impact it may have on our fee performance, and more concerned about the impact it has on uncertainty and sentiment which can be pretty negative."

With that in mind, we believe that should a deal be made the bank (and sector) can bounce back in coming quarters. Regarding the health of the U.S. consumer and our positive view on JPMorgan in particular, we would also call out Dimon's comments from the release, where he noted that the bank's "customer-centric business model has benefited from a healthy and engaged U.S. consumer that is spending, saving and investing. We continue to outpace the industry in consumer deposit growth, albeit slower, and client investment assets increased for the year on record net new money flows."

When asked if he was pleased with the quarter, Dimon stated, "I am fully happy with it. The franchise is strong... Products and services, but we're not immune from the weather, volumes and volatility. We're not immune from market prices and assets going up and down. And I like the loans up 6%, assets up sub-10% long-term flows up by like the fact credit cards business spend up 10%. Merchant processing up 17%. Shares in almost every business market shares have gone up that's what I look at... I really don't pay that much attention to speed bump a little bit but fact that volumes are low in last 3 weeks of December. I honestly couldn't care less, and I look at more like in Equities we've gained share, and we're now bumping up to #1. Those folks have done a great number of course, cash derivatives, prime broker, et cetera, and Fixed Income we're maintained our share and adding an product and services around the world and..." Given that the trading weakness was industry-wide we believe this is exactly what members should be taking away from the quarter, the underlying business remains strong and when it comes to things that management has control over (public market valuations and prices levels not being amongst of them), they continue to execute and gain market share.

Bottom line, we believe the 4Q18 weakness, largely resulting from low volume in December, was already well understood by the market and previously priced in to shares, we therefore reiterate our One rating and believe that current levels, with shares trading at ~10x forward earnings with a dividend yield over 3%, represents a solid entry point for those looking to initiate a position or reduce their overall cost basis.

Members interested in reviewing the earnings material may do so here.