On Wednesday before the opening bell, Goldman Sachs (GS)  reported a top and bottom line beat with its fourth quarter earnings release. Net revenues of $8.08 billion (+3% Year over Year or YoY) exceeded the expectation of around $7.78 billion, and earnings per share of $6.04 (up 6.3% YoY) smashed the consensus of $5.61.

Building on the solid headline numbers, the annualized return on average common shareholders' equity (ROE) was 12.1% in the quarter and the full year 2018 result was 13.3%, the firm's highest figure since 2009. Furthermore, the annualized return on tangible equity (ROTE) in the quarter was 12.8% (consensus 12.3%), and the firm's full year 2018 figure at 14.1%. In terms of book value per share (BVPS), the firm ended the year at a value of $207.36 (+14.6% YoY) while tangible book value per share (TBVPS) grew to $196.64 (+15.3% YoY). Remember, we see ROTE as a key driver behind the price-to-tangible book value multiple, which as of Wednesday's open to Goldman's end of year tangible book value, stood at a meager 0.95x. We believe that Goldman's improving ROTE performance justifies a higher multiple on the stock than what the market provided it with, and the inexpensiveness of the stock is why we are willing to fight through near-term 1MDB-related pain. In reaction to the solid print, shares are outperforming Wednesday and were trading more than 5% higher at the time this was written.

Regarding capital return initiatives, the bank repurchased 5.6 million shares at an average share price of $222.30 for a total cost of $1.25 billion. On that note, we remind members that Goldman Sachs was authorized under the 2018 CCAR cycle to return a total of $5.0 billion within the current cycle, which ends June of this year, leaving a total of roughly $2.5 billion to be returned by the end of the second quarter of 2019.

As for the bank's standardized common equity tier 1 (CET1) ratio, which compares core equity capital to total risk-weighted assets and is a measure of financial strength, the firm ended the year at 13.3%, which is higher than 11.9% result from a year ago. This should put Goldman in a better standing in this year's CCAR testing compared to a year ago, when the Fed did not allow the firm to increase its total capital returns.

Moving to the individual operating segments, starting with Investment Banking, net revenues of $2.04 billion (-5% YoY) exceeded consensus of $1.88 billion as Financial Advisory produced net revenues of $1.20 billion (+56% YoY) while net revenues in Underwriting underwhelmed at $843 million (-38% YoY). Financial Advisory performance was the strongest in over three years, meanwhile, Underwriting performance was limited in both debt and equity underwriting due to a decline in leveraged finance activity and a decline in secondary offerings, respectively.

Moving to Institutional Client Services, net revenues of $2.43 billion (+2% YoY) came in just short of consensus of $2.581 billion, but we also have seen estimates closer to $2.3 billion. The mild quarter in this business was hampered by the same factor that plagued peers, that being weaker-than-expected performance in Fixed Income, Currency and Commodities (FICC) Client Execution, but at $882 million (-18% YoY) versus expectations of $992 million. Meanwhile, Equities revenues of $160 billion (+17% YoY) was in-line with expectations of $1.637 billion. Although FICC has struggled due to challenging market conditions, Goldman still has one of the best franchises as evidenced by the 65-basis point increase to wallet share since 2016.

At Investment & Lending, net revenues of $1.91 billion (-2% YoY) once again came in well ahead of expectations for $1.35 billion as an 18% decline in Equity Securities revenues to $994 million was offset by a 23% YoY jump in Debt Securities and Loans revenues to $912 million. Equity performance was hampered by a decline in public equities investments while Debt and Loan performance was driven by a significantly higher net interest income. Going forward, management plans to be more transparent in this business.

Finally, within Investment Management, net revenues of $1.7 billion (+2% YoY) slightly edged the consensus of $1.68 billion as a result of increased incentive fees and transaction revenues. Meanwhile, management and other fees were basically unchanged from a year ago. Total assets under supervision declined $8 billion to $1.54 trillion as the December selloff in equities took its toll on long-term assets under supervision, which fell $47 billion in the quarter, including net market depression of $50 billion, partially offset by net inflows of $3 billion.

The breakdown of the company's full year net revenue mix by segment is below. 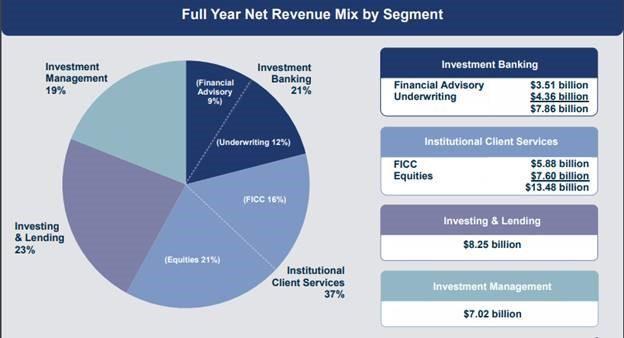 Finally, CEO David Solomon provided an update on 1MDB at the top of the conference call. He spoke to how they are cooperating with the Department of Justice and other regulators and remain focused on a "timely but deliberative process." Then, he apologized to the people of Malaysia for the role that former Goldman partner Tim Leissner had in the scandal. Later, he added that "before each transaction, considerable due diligence was conducted." The more he discussed Leissner's role in the scandal and how written assurances were sought and received from both 1MDB, and in the final offering, the government of Malaysia itself, the more we felt this was an isolated event at the company and the firm was lied to. Equally important, Solomon confirmed that the firm's client franchise, including Asia, "remains extremely strong," suggesting that the franchise is intact despite the headline risk.

All in, it was a strong report for the company compared to what was expected. As we have said previously in our defense, we believe the stock price of a financial firm should ultimately move in the same direction of tangible book value per share, with improvements to Return on Tangible Common Equity (RoTCE) acting as an addition push/pull lever. During this period of increased headline risk, we have preferred to take a longer-term view on this stock because the firm has checked both  boxes. We continue to see a business that has steadily grown its tangible book value while RoTCE has increased to multi-year highs. It is refreshing to see a dirt cheap and hated stock like Goldman get more respect today in reaction to the print.

One detail that we did hope for was a quantified "reserve-type" fund for 1MDB like we outlined in our Alert from Monday here, however, we think the candor of Solomon's update, which shed more light on what we reported in our December members-only conference call here, has helped the stock and the firm's reputation. Furthermore, what the growth in tangible book value per share means to us is that the firm will be well-equipped to handle future litigation. Lastly, it is clear that this new management team is committed to find ways to improve the client experience through emphasized automation and platform enhancements, but they still were able to demonstrate a good handle on cost management. Then generally speaking, we appreciate the steps the new management has taken to build trust with the sell-side, including greater reporting transparency and more detailed explanations of the company's business plans. Small steps like this can go a long way.