"Through our continued solid operating performance in 2018, we met and exceeded our long-term financial commitments," said Robert A. Bradway, chairman and chief executive officer, in the press release. "Looking to the future, we are encouraged by our long-term growth prospects driven by our portfolio of newer products, pipeline and ongoing success in international expansion."

The company's full global commercial review can be found in the slide below, but let's review the drug's with either quarterly sales greater than $400 million in the quarter or the ones that are integral to our long-term thesis. 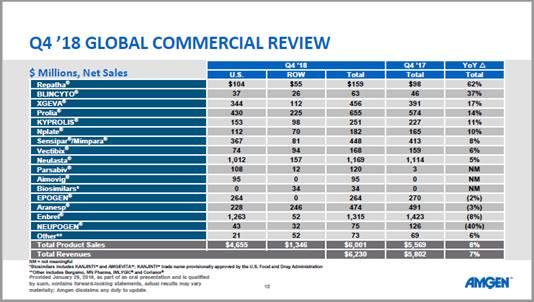 Worldwide Enbrel sales decreased 8% year over year to $1.315 billion, which still came in higher than the $1.297 billion consensus. The declines were primarily from unit volume, which fell 4% year over year, and a decline in net selling price. As a reminder, there is future risk in this drug as it is the subject of upcoming litigation on its intellectual property, but we didn't get too much insight on this during the call. Looking ahead, management expects the first quarter of 2019 as a percentage of full year sales to be similar to the first quarter of 2018.

Worldwide Neulasta sales increased 5% year over year to $1.169 billion, which beat the consensus of $999 million. The year over year increase was driven by a $55 million purchase from the U.S. Biomedical Advanced Research and Development Authority. This drug is expected to face heavy competition from biosimilars this year, and guidance currently reflects two competitors in the market with the potential for additions before the end of 2019.

Worldwide Prolia sales increased 14% year over year to $655 million, ahead of the $620 consensus. The product saw double digit unit volume growth across geographies.

Worldwide Aranesp sales fell 3% year over year to $474 million, slightly ahead of the $469million consensus. The year over year decline was driven primarily by unfavorable changes in inventory and lower net selling prices. Looking forward, management expects sales to decline at a faster rate in 2019 due to both long-acting and short-acting competition.

Worldwide Sensipar/Mimpara sales increased 8% year over year to $448 million, ahead of the $424 million consensus. The year over year increase was driven by favorable prior period accounting estimates and higher net selling price. But volumes continue to decline due to the adoption of Parsabiv (more on that below). Long-term, the outlook in Sensipar is uncertain due to ongoing litigation, and management's guidance (more on this below) reflects the wide range of possible outcomes,

As for Repatha, worldwide sales increased 62% year over year to $1159 million, which beat the consensus of $144 million. The year over year growth with driven primarily by unit volume, offset partially by lower net selling price. Recall that management slashed the price of Repatha late in 2018 to make it more accessible to patients. It's a move that will sacrifice net price in the near term but improve volumes in the longer run.

Parsabiv sales of $120 million was $3 million more than the consensus. Management saw strong utilization at independent and midsize dialysis provides, and larger dialysis organizations continue to increase adoption at a gradual rate.

Lastly, Aimovig, Amgen's breakthrough migraine prevention drug, finished the quarter with $95 million in U.S. sales, nearly doubling the consensus view of $49 million in sales, though $20 million was related to a prior period accounting adjustment. Although Aimovig continues to be immaterial to current earnings, the quarterly results reinforce our view that analysts have underappreciated the growth potential of this product and long-term estimates will be raised. Importantly, the quarter showed healthy trends that support our view of the product launch trajectory. There has been over 150,000 patients starts since launch and paid subscriptions in the fourth quarter increased to about 50%, which is up from about 35% in the third quarter. Although competition from Eli Lilly and Teva remain, Amgen management said that Aimovig exited 2018 with the majority share of the CGRP market which grew 150% quarter-over-quarter in the fourth quarter.

We voiced our concern about guidance and the impacts of biosimilar/generics last week when we downgraded our rating and trimmed shares at around $201 in our Alert here . As the days progressed, investor expectations on guidance became even more skittish after the stock was downgraded by Evercore ISI on Monday (we wrote about this here ). Shares declined after hours, confirming our decision to trim shares for that reason ahead of the quarter.

Overall, it was a really nice fourth quarter for Amgen with several beats across the board. However, the weak guidance will get the most attention and drive the direction of the stock tomorrow. Guidance is certainly weak and a disappointment, but we've seen many on the sell-side reiterate that this is just management being conservative based on history. We see an argument for that. There are many uncertainties on several blockbuster products and the large earnings range reflect a wide range of possible outcomes. The lower ranges of guidance likely reflect too much worst-case scenario. Either way, we downgraded our rating to a TWO out of preparation for the biosimilar and generic risk and we reiterate that rating tonight.