On Tuesday, shortly after the opening bell, the Institute of Supply Management (ISM) reported that the non-manufacturing index (NMI), which tracks the service sector of the economy, jumped 3.0 percentage points in February to 59.7%, surpassing expectations of 57.2%, following January's 56.7% reading. The better-than-expected results comes after last week's PMI report (here), which missed expectations, coming in at 54.2% vs. consensus of 55.8%.

Recall that any reading above 50% represents expansion while anything below 50% indicates a contraction. The higher the reading is above 50%, the faster the rate of growth. Additionally, according to the ISM, an NMI reading above 48.6%, over time, is usually indicative of an expansion of the overall economy.

Importantly, according to Anthony Nieves, chair of the Institute for Supply Management, "The past relationship between the NMI and the overall economy indicates that the NMI for February (59.7 percent) corresponds to a 3.9-percent increase in real gross domestic product (GDP) on an annualized basis." 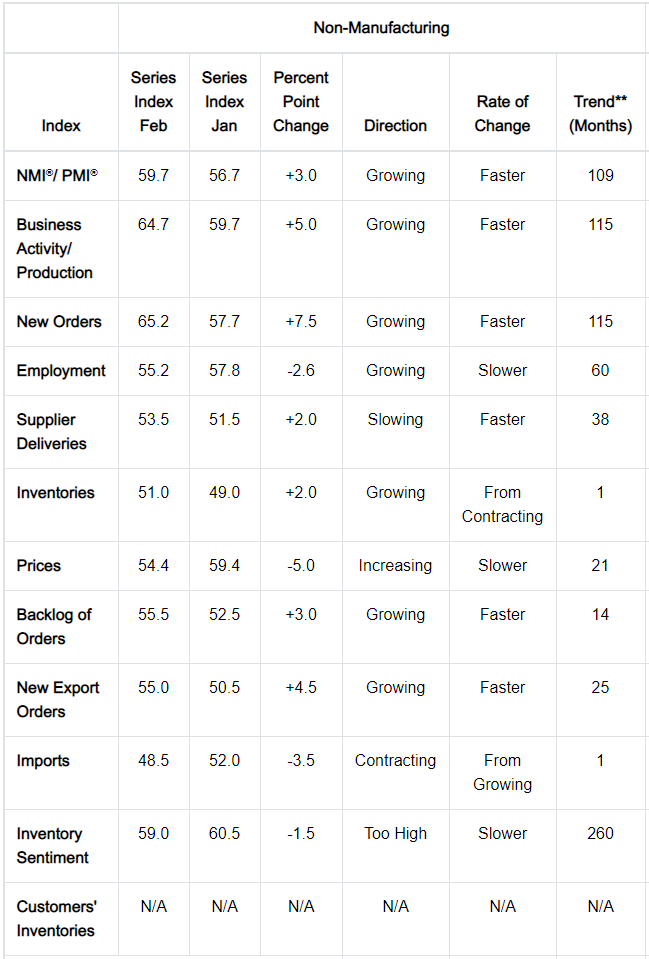 Lastly, in order to help members use this report to better gauge their own investments, we want to include a few quotes from ISM survey respondents in the various industries covered, pulled directly from the ISM report:

All in all, the report serves to back our view that this U.S. expansion still has room to run. As a result we continue to believe that a U.S./China trade deal remains the next potential catalyst for the market, with the size of that move, and the question of whether it is viewed as a "sell the news event" (a view we believe would ultimately be misguided) or puts us in rally mode, heavily reliant on the ultimate terms of the deal and the decisions made regarding tariffs already in place (if they are maintained, reduced or removed completely).

Members interested in digging even deeper can view the official release here.