Late Tuesday, the U.S. Food and Drug Administration approved Johnson & Johnson's (JNJ) Spravato (esketamine) for the treatment of treatment-resistant depression. Below is the company's slide on esketamine from its September 2018 Pharmaceutical Business Review presentation: 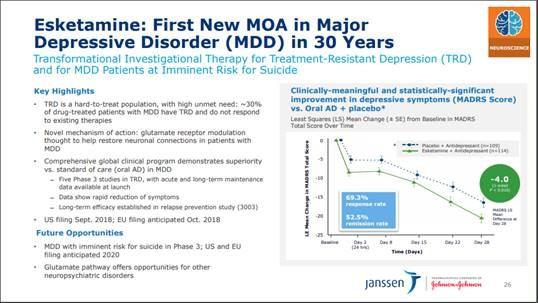 We've been tracking esketamine's progress for quite some time now, noting management's commentary on their earnings calls and providing updates when it first was recommended for approval by the FDA Advisory Committee. Esketamine was even one of the focuses of Jim's interview with CEO Alex Gorsky on Mad Money back in mid-February that can be found here. It's importance to society is that significant.

"As you know, there is more than five million people in this country who are suffering from severe treatment-resistant depression," Gorksy said on Mad Money. "And unfortunately, as a result of that, almost 40,000 suicides are committed every year in this country. And there hasn't been anything new in almost 30 years. And to finally get a new compound that offers hope for these patients and goes to work in a reasonably short period of time and also has good durability and offers them real hope and that's going to be esketamine, we could not be more proud."

"It's a very - clearly a huge unmet medical need," Gorsky later added. "All of us probably know veterans, we know family, we know friends who have been afflicted by this. And so to be able to bring something out, we are just, you know, so excited about it."

Sales might not be material this year, but we expect Spravato to act as an additional driver to the company's already above-market growing pharmaceutical franchise. The long-term prospects of an unrivaled drug in a high unmet medical need simply call for it. Analysts at Barclays wrote in a note today their 2020 sales forecast of $270 million, which would be double what the Street expectation is. Barclays outer year forecast then works its way to greater than $700 million sales in 2023. This is a solid trajectory, but we think it understates Spravato's potential -- it should be bigger on an accelerated timeline because of its life-saving possibilities. In support of this view, we refer back to a previous Morgan Stanley note from mid-February that expected this product to be $1 billion by 2022.

Overall, as big a win as this is for Johnson & Johnson shareholders, it's an even bigger win for our veterans and anyone else dealing with treatment-resistant depression.