Last Friday, the Wall Street Journal reported some news that impacts the CVS Health (CVS) -Aetna merger, even though this transaction was completed in late November of 2018. Per the report, Federal Judge Richard Leon in Washington, D.C. "will hear from witnesses including the American Medical Association in live testimony on the deal in May," to determine "whether the deal is in the public interest." The news comes following a December 2018 WSJ report stating "Among other things, Judge Leon cited objections by the American Medical Association, which argued the merger would substantially reduce competition in health care to the detriment of patients." Given that this news continues to be a headline risk on the stock despite the unlikelihood of the two actually de-merging, we felt it necessary to analyze the potential outcomes.

The first (and best scenario) is of course that the judge accepts the Department of Justice's previous ruling and finds no issues with the merger, allowing the integration (which is already well underway) to proceed. This outcome would then remove an overhang, and in our view, result in upside as investors can forecast the integration and resulting business dynamics (and future earnings and cash flows with increased certainty).

That said, per the Journal article, "A federal law called the Tunney Act requires the government to have proposed merger settlements approved by a federal court, which determines whether the deal is in the public interest." Should Judge Leon find the deal to be against the public interest, he could be determined to either force changes that would address any anti-competitive issues relating to the merger or potentially call for an outright reversal of the Justice Department's decision to approve the merger. It is worth noting that CVS has already taken measures to alleviate such anti-competitive concerns raised by the Justice Department through the sale of Aetna's Medicare Part D prescription to a subsidiary of WellCare Health Plans  (WCG) . Furthermore, a general tenet of CVS Health has been to improve consumer health at lower costs.

Also, according to the Journal, "The Justice Department on multiple occasions has maintained that the judge doesn't have wide-ranging authority to require the government to challenge parts of a merger that it didn't believe to be problematic. Instead, it argued the court's role was limited to ensuring that the government's antitrust settlement sufficiently addressed the threats to competition that it identified."

However, while we believe a full on rejection of the merger to be highly unlikely and question how much, if any, influence Judge Leon has to contradict the Justice Department's ruling, we think it is a scenario worth considering as it allows to better quantify the result of a worst-case outcome. Should this be the case, we would essentially be back at step one, with CVS being strictly a pharmacy, PBM, retail operation without the added synergies and verticals provided by Aetna.

That said, offsetting the loss of the high growth Aetna business, CVS would shed the ~$45 billion in new debt the deal added to its balance sheet (plus another $8 billion assumed from Aetna); recoup a portion of the cash spent and recall some of the 274.4 million shares issued (which at the time created a dilutive dynamic to EPS) to fund the deal; not to mention remove the overhang of integration risk (and credit rating downgrades due to the debt load) and headline risk relating to the ACA (despite Aetna having nearly zero exposure whatsoever it does trade in high correlation with exposed MCO's on ACA updates). In total, this would allow for a more certain forecast of business conditions, profitability and cash flow. 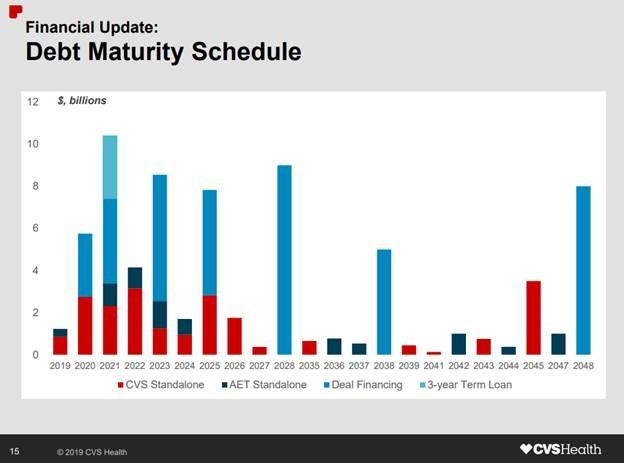 Additionally, we remind members that in order to repay the debt and reduce leverage, management guided that it would halt share repurchases and dividend hikes until reaching the targeted low 3x adjusted debt-to-adjusted EBITDA leverage level. So, any forced divestitures could see either a massive share repurchase program and/or dividend activity resume as a result. 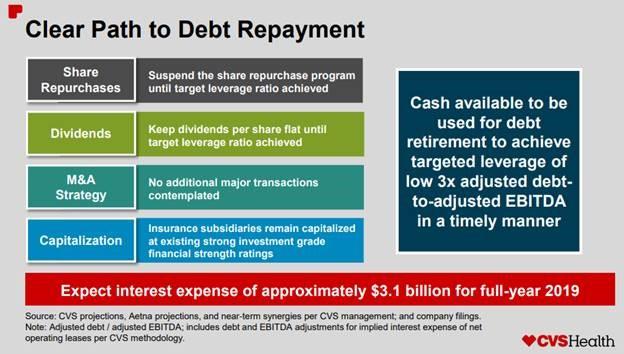 Based on the above, you might question was Aetna worth it to begin with? We would counter with the biggest negative is simply that it would also start to look a lot more like Walgreens Boots Alliance (WBA) , without the much needed offsets to the issues weighing on both companies such as increased reimbursement pressure, lower generic deflation, reduced brand inflation and pressured same store sales as the Amazon (AMZN) onslaught continues. It is short-term pain of upfront investment (which stands to bear longer-term gains) versus short-term reward of a stock buyback/reduced debt and no real solution or offset for the fundamental issues impacting the traditional pharmacy/PBM/retail business model.

If we do look at it as a direct compare to Walgreens, we would see that the stock could gain some ability to see multiple expansion - the multiple has no doubt been pressured by the large debt load and integration uncertainty relating to the takeover - as WBA currently trades at just over 9x forward earnings (despite its horrendous quarterly release) while CVS trades at ~7.8 forward earnings.

Additionally, while there would no doubt be significant volatility as analysts rework earnings projections, something that has become increasingly more difficult given the progress already made on integrating certain aspects of Aetna's and CVS Health's businesses, we believe this would be short-term in nature as the longer-term benefits of the integration, including additional earnings and exposure to a much higher growth market, would be offset in the near-term by increased buyback and dividend activity.

Given that it is nearly impossible to quantify what 2019 (and beyond) EPS would look like if CVS and Aetna were forced to part ways, again something we view as highly unlikely, we will not attempt to do so. Instead, the purpose of this analysis is simply to illustrate that there would still be a number of catalysts that could cause the stock to actually push higher because we believe the makeup of the enterprise is undervalued relative to the value of its peers. Additionally, we reiterate that from our point of view as a long-term investor, we would view any repeal of the merger approval to be highly detrimental to the company's longer-term outlook and be forced to reconsider our position as a result.

Bottom line, while we are aware of the overhang on the stock resulting from Judge Leon's insistence on hearing live testimony, we do not believe it poses any additional risk to the downside and continue to view shares as deeply undervalued regardless of the outcome. We therefore reiterate our One rating and will continue to look for material weakness as a means to reduce basis and increase our position as we continue to be of the mind that the Aetna integration will take place and the longer-term outlook of the company will be much brighter as a result.