The U.S. Bureau of Labor Statistics reported Wednesday morning that the Consumer Price Index (CPI) increased 0.4% in March on a seasonally adjusted basis, outpacing expectations for a 0.3% monthly increase. This follows a 0.2% advance in February, which itself came on the heels of three months of unchanged readings (November through January). Over the last 12 months, the CPI has increased 1.9% before seasonal adjustment, also exceeding expectations for a 1.8% increase and represents an acceleration from February's 1.5% annual pace of advance.

The so-called "core" CPI, which excludes food and energy costs due to their volatility, rose 0.1% in March, short of expectations for a 0.2% increase and coming on the heels of 0.1% advance in February. Over the past 12 months, core CPI has risen 2.0%, also a miss versus expectations of a 2.1% annual increase, and below February's 2.1% annual rate of advance.

As a reminder, core CPI can be viewed as one proxy for inflation, core PCE (personal consumption expenditures) being the Fed's preferred gauge. As a result, we believe the annual rate of advance seen in March to represent an economy that continues to advance at a healthy clip, but not so fast as to justify further rate hikes in the near-term. 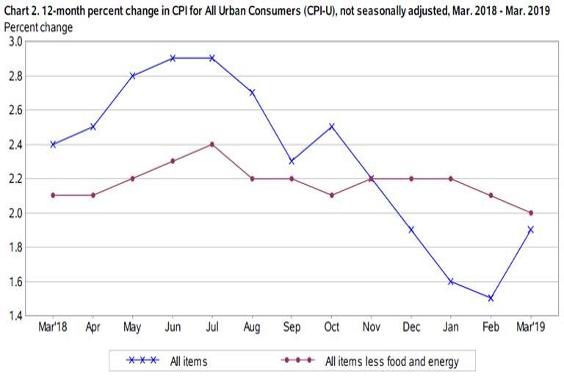 Over the last 12 months, the energy index has fallen 0.4% while the food index has gained 2.1% from the same time last year.

Wednesday's CPI numbers come ahead of Thursday's release of the March Producer Price Index (PPI), where we will be looking for a 0.3% advance on a monthly basis and a 1.9% increase annually. As a reminder, the PPI measures price changes from producers' perspectives, while the CPI gauges price changes from the consumers' viewpoint.

The two indices tend to be correlated, as producers and retailers often pass cost increases on to the consumer. But divergences can occur, as the two indices track slightly different metrics. For example, CPI includes imports and owners' equivalent rent - two metrics excluded from the PPI. Another difference is taxes, which consumers pay on purchases and are included in CPI but excluded from PPI because they aren't a part of producer revenues.

All in, this is precisely the type of reading we like to see as it indicates that the U.S. economic expansion remains on track, however, it's not hot enough so as to justify further rate hikes in the near-term. For this reason, we believe that despite expectations of flat-to-down 1Q19 earnings, the market can continue to grind higher as U.S. companies have a solid macroeconomic backdrop domestically, and we believe will see a stronger international macroeconomic backdrop that leads to a rebound in future growth expectations should the ongoing U.S./China trade dispute be resolved.

Members interested in digging even deeper or learning more about what the CPI measures and how it is derived can view the U.S. government's official release here.