Shortly after the opening bell, we will be initiating a position in Marvell Technology Group (MRVL) , buying 1750 shares at a bid/ask of $24.02/24.49. Following the trade, MRVL will represent 1.51% of the portfolio.

We are calling up MRVL out of the bullpen and putting it into the portfolio as we are continuing our work of putting our big cash position to good use. The slide deck to Marvell's 2018 Investor Day presentation can be found here, the company's first quarter FY 2020 financial results press release can be found here, and Jim's recent interview with CEO Matt Murphy can be found here.

On a high level, our thesis on MRVL is mainly predicated on Marvell's integral role in the 5G cycle. In Jim's interview, linked above, CEO Matt Murphy explained that from an infrastructure viewpoint, which Marvell plays to by creating the network that needs to be built and running to support all of the new, 5G enabled devices that will come to market over the next several years, Murphy sees this cycle as "starting now" and then "building robustly" next year 2020. 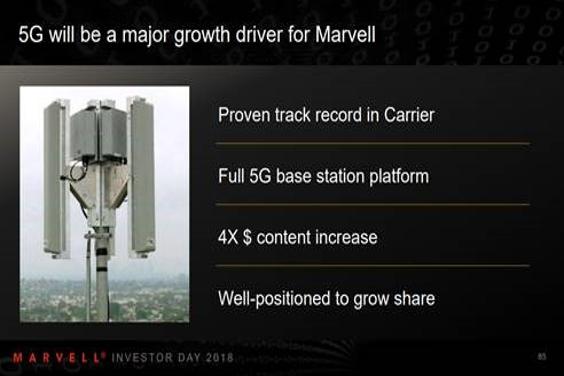 What really put Marvell on the 5G infrastructure map was its $6 billion acquisition of Cavium that was completed in July 2018. This deal helped Marvell diversify from a commodity storage play into "an infrastructure solutions powerhouse" that has its tentacles in 5G, the cloud, AI, enterprise hardware, and autos, while expanding the company's serviceable addressable market to $16 billion (and this has since been revised to $18 billion as of the May 2019 Investor Day). As CEO Matt Murphy has previously stated, "Integrating Cavium gives us leading positions in processors, security and fiber channel storage, all of which offer customers an unmatched end-to-end infrastructure portfolio."

One field that Marvell has a growing presence in is Carrier infrastructure and base stations. Not only does Marvell offer a full 5G base station platform, Marvell also has four times more dollar content in the new stations compared to 4G. According to a recent note from Piper Jaffray, "As 5G base stations rise from ~200,000 in 2019 to over nearly 1.6 million in 2022, we fee Marvell is in the pole -position as a base station chip supplier as FPGAs are replaced by ASSPs. We believe Marvell is the only supplier of ASSPs at this time, with a potential 1.5 to 2-year head start in ASICs."

And just to put out some projections/expectations of how Marvell sees the 5G cycle compared to other cycles, the slide below demonstrates the Infrastructure revenue trajectory that is expected to occur over the next few years. 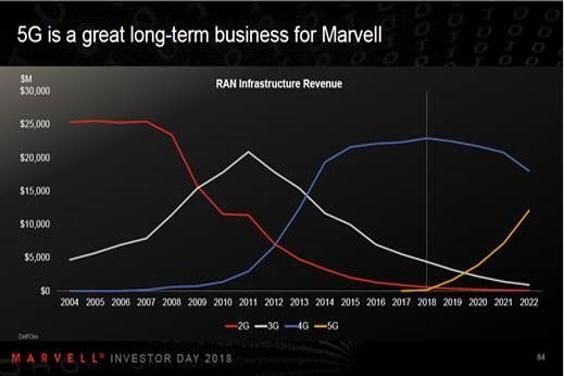 The Cavium deal was a big step in the company's transformation, but Marvell didn't stop its efforts there. In fact, the company is coming off a very active May month in terms of M&A and reshaping the company's future into a leading supplier in the infrastructure market.

For example, Marvell announced near the start of the month that it will acquire Aquantia, a leader in Multi-Gig Ethernet connectivity for $452 million in cash. This deal isn't a 5G play, rather it's about broadening Marvell's connectivity solutions portfolio and capitalizing on the future of high-speed networking requirements in cars that are needed to enable autonomous, electric, and safety/security applications.

About two weeks later, Marvell announced it plans to acquire Avera Semiconductor, a developer of custom ASICs for networking and telecom equipment for $650 million upfront in cash. Now this transaction was a 5G additive play as Avera's biggest end market exposure is base stations, which are leveraged to 5G as mentioned above. Speaking to this deal on the recent earnings call, Murphy said, "we have immediate opportunities in 5G, which we can now transition into design wins. Marvell's broad technology platform will also enable the Avera team to help us become a leading-edge ASIC provider to a wide range of networking and cloud customers."

About nine days later, the company announced its sale of its Wi-Fi Connectivity Business to NXP Semiconductor (NXPI) for $1.76 billion in cash. This transaction is expected to close by calendar Q1 2020, and the divestiture of this business is expected to improve the gross and operating margins upon closing.

Combining these three transactions, Marvell will have about $500 million in excess cash to boost the balance sheet that can be used for both buybacks and debt reduction, and that does not include whatever free cash flow Marvell will generate from the combined businesses.

Explained differently, Marvell is funding its two lower priced but faster growing acquisitions with the sale of a higher priced, but slower growing business. Plus, there will be excess cash to spare. Here is what CEO Matt Murphy said about the deals on the May earnings call:

"Once we complete all 3 transactions in the first year post close," Murphy said on the call, "we will be replacing approximately $300 million in Wi-Fi revenue that we are selling for a 6x revenue multiple with greater than $400 million in combined in Aquantia -- combined Aquantia and Avera revenue we are purchasing for a 3x revenue multiple. This new revenue will be on a faster growth trajectory and will accelerate Marvell's ability to capitalize on 2 critical industry trends, 5G and connected cars, and will also command higher growth and operating margins over the long term."

Of course, we must address the elephant in the room: Huawei exposure. Although Marvell does do some selling into the Chinese telecom maker that is squarely in the cross hairs of trade current negotiations between the U.S. and China, its overall exposure looks very manageable. On the company's May earnings call, management said that its exposure is limited to about a mid-single digit percent of total revenue. This little amount of exposure won't entirely shield the stock from a broader semi selloff related to escalating tensions, however, it is important to keep in mind how Marvell is also a seller into other 5G OEMs.

We are initiating the position with a $28 price target, which reflects roughly 22.5x Calendar Year 2020 consensus EPS estimates. That being said, we think that there could be more room for upside here as anticipation of a strong 5G ramp builds and raises estimates.