After the bell on Tuesday, Amgen (AMGN) reported a top- and bottom-line beat with its second-quarter earnings result. Total revenues of $5.871 billion (-3% YoY) exceeded estimates of $5.686 billion, and adjusted earnings per share of $3.97 (+4% YoY) cruised past estimates of $3.59.

"With our newer products generating strong volume gains globally and many first-in-class medicines advancing through our pipeline," CEO Robert Bradway said in an earnings release, "we are well positioned to serve patients and deliver long-term growth for our shareholders."

The company's full global commercial review can be found in the slide below, but let's review the drugs with quarterly sales greater than $400 million and those that are integral to our long-term thesis. 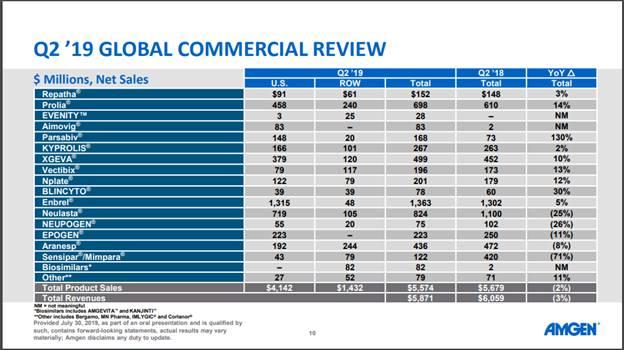 Worldwide Enbrel sales increased 5% year-over-year to $1.363 billion, topping consensus estimates of $1.235 billion. Driving the gains were net selling price benefits and favorable changes in inventory levels, offset partially by lower unit demand. Even though this product delivered a solid beat, keep in mind that its patents are going through review.

Neulasta sales declined globally 25% year-over-year to $824 million, falling short of the consensus of $904 million. The sharp year-over-year decrease was driven by lower net selling price and the impact of biosimilar competition on unit demand, which management has pointed to for multiple quarters now.

Global Prolia sales increased 14% year-over-year to $698 million, ahead of the $678 consensus. Driving the increase in sales was the 15% increase in unit volume and the double-digit increase in new U.S. patients.

Worldwide Aranesp sales fell 8% year-over-year to $436 million, topping expectations of $415 million. The year-over-year decline was driven primarily by the impact of competition on units, which fell 8%. Looking forward, management continues to expect sales to decline at a faster rate in 2019 due to competition, the same guidance management provided in the first quarter.

Repatha saw worldwide sales increase 3% year-over-year to $152 million, a miss against the consensus of $160 million. The year-over-year growth was driven primarily by unit volume, offset partially by a lower net selling price that reflects management's decision to cut the list price by 60% (more volumes, less price) and contracting/access changes.

Parsabiv sales of $168 million worldwide were up 130% year-over-year, topping estimates of $140 million. Similar to the previous quarter, management saw strong use at independent and midsize dialysis providers, and larger dialysis organizations continue to increase adoption gradually.

Even though some of Amgen's core products are experiencing biosimilar-related declines, the company's own biosimilar portfolio contributed $82 million to sales (all outside the U.S.), up from $2 million one year ago, and $55 million in the first quarter. Of note, recent launches of Kanjinti and Amgevita, a biosimilar to Humira, outside the U.S., are already annualizing above $300 million in sales.

Lastly, Amgen's breakthrough migraine prevention drug Aimovig, finished the quarter with U.S. sales of $83 million, a nice beat against a $75 million expectation. It's an encouraging result for this leader within its new and expanding class, though we are watchful about the competition from Eli Lilly's (LLY) Emgality, which reported $34.3 million sales in the second quarter. Aimovig's paid prescriptions increased to over 70% in Q2 vs. about 60% in Q1, and management expects net selling price to remain relatively stable going forward. There is still a ton of potential here as Amgen estimates that 7,000 patients a week start CGRP therapy.

As for some other metrics, Amgen generated $1.3 billion of free cash flow, down from $1.9 billion in the second quarter a year ago. The company ended the quarter with approximately $21.8 billion in cash, down from $29.4 billion a year ago, but still plenty of capacity.

During the second quarter, Amgen repurchased 13.1 million shares of common stock at a total cost of $2.3 billion, above previous guidance of $1.5 billion to $2 billion. Management still has $4.7 billion remaining under its current buyback authorization and plans to buyback an incremental 1 billion to 2 billion worth of shares in Q3.

Furthermore, the company now expects adjusted earnings per share to be in the range of $13.75 to $14.30 (midpoint $14.03, consensus $13.99), up from previous guidance of $13.25 to $14.30. We appreciate the raised lower end of the guide but would have prefer to see management raise both ends of the guide on second half confidence.

In the pipeline, management is planning the initiation of a potentially registration monotherapy study this year for AMG 510 (a small molecule KRAS G12C inhibitor). Management will provide a progress update in lung cancer at the 2019 world conference in early September. This is terrific update for the pipeline due to AMG 510's potential of turning into a blockbuster drug.

For the stock, shares are up a couple dollars in reaction to the print, and we do not want to discount the solid top- and bottom-line beat with the lower-end guidance raises, however, we still have concerns about where the upside is coming from. Amgen has reported better-than-expected results from Enbrel for two quarters in a row now, and this is a mature product that is heavily subject to patent risk, as we have written endlessly about.

In fact, Enbrel's risk was the key reason why we greatly scaled down this position into strength at varying prices from $188 to as high as $201. The products where we want to see more outperformance is Aimovig and Repatha, which was once again mixed this quarter. Meanwhile, the next highest selling drug Neulasta, saw a sharp decline due to biosimilar competition, which isn't going away any time soon. Amgen has plenty of capacity on its balance sheet to strike a deal and improve its growth outlook, but the way some large-cap health care stocks have reacted to mega-deals this year (Bristol-Myers  (BMY) and Abbvie (ABBV) ) maybe there best move would be a more "bolt-on" deal like for Celgene's (CELG) Otezla.

We only have 175 shares remaining in this tag end of a position, and we've kept some on to capture the potential upside of a favorable Enbrel court ruling (the decision is expected to be imminent, but we've tiredly heard this for multiple months now), but patience is waning and there are better health care stocks in the market right now.