In addition to the positive headline results, billings, a key metric that the market fretted over in the previous earnings report, surprised to the upside as the company delivered $1.056 billion vs. an expected $822 million. But there was some general softness in some other key areas like free cash flow, which at $178.4 million missed expectations of $192 million, and weakness in margins dragged on results, too.

"We had a strong fourth quarter, surpassing a billion dollars in billings within the quarter for the first time, and achieving approximately 180% year-over-year growth in our newer Prisma and Cortex offerings," CEO Nikesh Arora said in the release. "This year we acquired and released important new technologies and built a robust go-to-market framework for driving their success."

But also Wednesday, the company told of weaker-than-expected guidance and announced its proposed acquisition of Zingbox, a company focusing on security of Internet-connected devices, for $75 million cash.

If there was ever a roller coaster reaction to an earnings result and commentary, this was it folks.

Immediately following the release, PANW shares plummeted to as low as $180 as the sellers digested guidance and the news of another acquisition. The sellers made their move against the stock.

But, then, as management delivered its Analyst Day Presentation, which we said in our Alert here would be just as important as the numbers, the stock came crawling back. It sits at the time of this writing at around $213, which is good for about a +6.5% move. This wild swing is an example of why we never encourage a "shoot first, ask questions later" attitude and that you must listen to the earnings call before trading a stock.

The Zingbox buy is yet another deal for Palo Alto Networks this calendar year, fitting the style of the deal-making Arora. You have to admire Arora's willingness to scoop up these smaller companies to broaden the product portfolio and expand the company's total addressable market (which is expected to grow to $72.6 billion by CY 2022).

"The addition of our proposed acquisition announced today Zingbox, Inc., a differentiated player in IoT security, continues our strategy of extending our platforms," Arora said. "Zingbox will add to the capabilities of our Next-Generation Firewall by offering a first-of-its kind subscription that will make it easier for organizations to protect IoT devices from attackers. It will also be available as a service on our Cortex platform."

But this pace of deals is diluting the company's bottom line -- as evidenced by the guidance -- and is confirming analysts' fears that he is moving too fast on the M&A front. It's a topic we struggle with, because we understand how consolidation in cybersecurity is necessary, but we also like earnings growth, as well. To help the market become more comfortable with management's M&A philosophy, the company provided the slide below to assure a plan is in place, and Arora isn't purely empire-building.

Quarter's One for One

Product revenue increased 12% YoY to $305.7 million, despite a consensus of $315 million. On the subscription and support side, revenue increased 29% YoY to $500.1 million, topping a consensus of $486 million. While its one miss, one beat, Palo Alto delivered the beat on the side we want, because product is more of the legacy business and subscription and support play more to the cloud -- and that's where the industry is headed.

Taking a look at fiscal 2020 guidance, management expects revenue in the range of $3.44 billion to $3.48 billion (+19% to 20% YoY), an outlook that is firmly in line with the $3.45 billion consensus view. Billings looks strong, too, with an expected range of $4.095 billion to $4.155 billion (+17% to 19% YoY) compared to an expected $3.985 billion. But none of this translates to the bottom line, as management expects non-GAAP EPS in the range of $5.00 to $5.10, an outlook that is well short of the $6.26 analysts' expectations. Included in management's guidance is a 34 cent per share net impact from recent acquisitions, but even if you back into the outlook, it still falls well short of expectations.

But management would not have held an analyst day event -- the first one since Nikesh Arora became CEO of the company -- if it only wanted to share its outlook for the next four quarters, right?

As management talked up industry trends and how Palo Alto Networks plans to beat its competition in cloud security, shares steadily began to climb higher. Analysts have asked time and time again Arora for his vision, and he delivered this on the call.

Later, on when management began to discuss its longer-term financial framework, shares stormed higher, back to the around $210, on some very bullish targets. There are plenty of slides in the presentation we could show, but for the sake of brevity we share the slide below as it provides management's robust targets by fiscal 2022. We view this outlook as a better-than-expected result that more than makes up for the weak fiscal 2020 guidance. 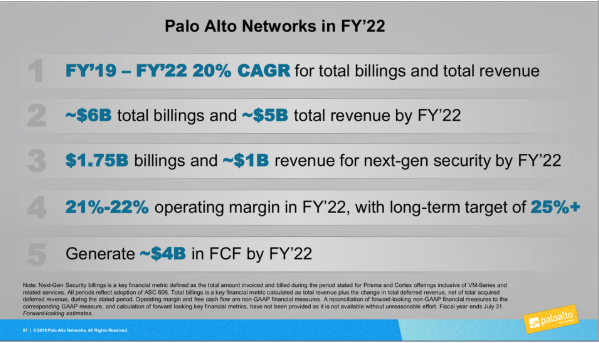 As we have come to learn with Palo Alto Networks, this is a stock that never makes it easy for us. In fact, we dedicated a huge portion of our February 2019 members-only conference call (replay here) on the inner workings of our investment timeline and how patience and disciplined paid off with some very low buys (like here and here) and several big sales at higher prices (like here and here). With our knowledge and homework of the company, we of course had to listen to the entirety of the analyst call and not react to the press release headlines, before we made our judgement. Management had a story to tell, and it was much better than what the guidance suggested.

When we bought shares at $196 a couple weeks ago in our Alert here, we said that we would deviate from our "3-rating" mold and label our remaining position a trade. Our thinking was clear: The stock just went through an emotional $20 per share selloff on news of a sales executive departure, and we added to our stake with the thinking that the results would be better than feared and operations would remain strong -- cybersecurity is a secular, growing industry, after all. While guidance underwhelmed (and that's to put it lightly), the dilution is for cause, the quarter and the huge billings beat backed up our claim about demand, and the stock's favorable reaction to management's impressive long-term target supports our broader thesis in this pure-play cybersecurity company.

With our mid-August "trade" a current success based on the stock's after-hours move to the upside, we are getting ready to declare our final victory on the very small position we have left. It's been a wild, yet profitable run, and we will hear if CEO Nikesh Arora has more good things to say Thursday on "Squawk on the Street."