It has been a tough start to 2021 for shares of Costco (COST) . Even though the business is firing on all cylinders with comparable-store sales growth accelerating in January, the stock has been incredibly unloved, down about 11% year to date compared to a 3% gain in the S&P 500.

Driving this divergence is changing investor sentiment. Throughout the pandemic, Costco was seen as a net-beneficiary because of their everyday low prices, ability to offer a safe shopping environment, and rise in at-home food consumption. But now that the vaccine rollout is progressing with additional supply expected to increase in the coming months, investors are selling their defensive, consumer staple types of names and buying more economically sensitive "reopening" plays that do better when people can freely leave their homes without restriction.

For a high-quality company like Costco, which is steadily increasing its market share with membership growth and typically rewards its shareholder base with special dividends from time to time, we believe at some point this stock will find a bottom and investors will once again re-embrace the terrific long-term story here. Costco is simply too good of a company and too well-run for that to not happen.

This raises the question: Is this roughly 11% pullback year to date enough to get investors on board again? After taking a closer look at COST, analysts at Oppenheimer said in a research note this morning that they think the bottom is near and it is time to buy the dip.

Oppenheimer talks about how they expect Costco to deliver strong numbers in the second quarter and speculate that a membership fee announcement could come as soon as 2022, but what we want to focus on today is valuation.

If you take a look at the Exhibit we have shared below, the analysts point out that COST shares currently trade in line with their historical tough levels on a relative basis. They think this level represents an "attractive entry point for longer-term players." 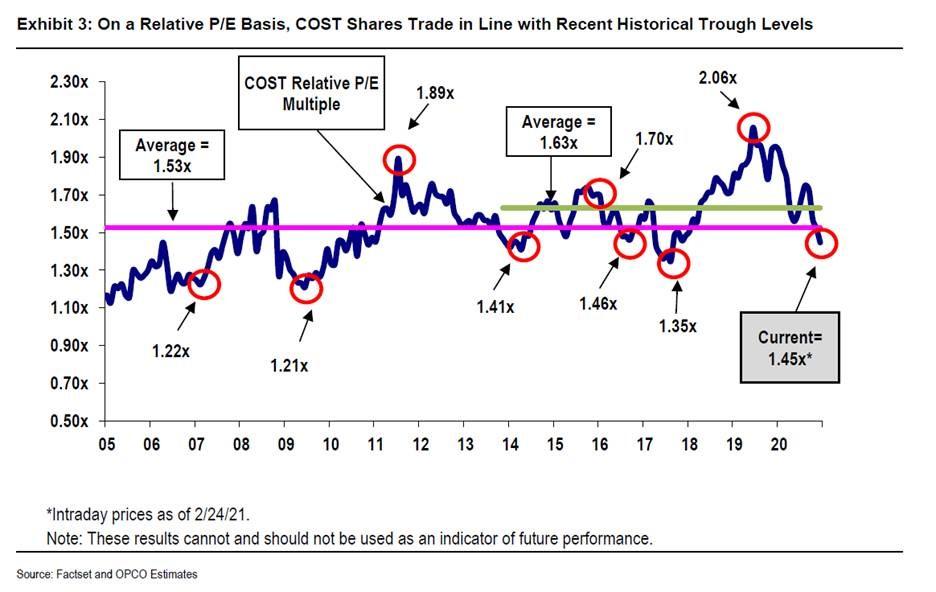 Based on Oppenheimer's work, what we see here is that COST has de-rated to a level where it has become cheap again on a relative, historical basis. And if you look at the pattern of how COST acted after its relative multiple de-rated to these trough levels, what has followed is a period of multiple expansion. This suggests the risk-reward has gotten attractive again, especially because we know the stock has been going down on no fault of company performance. Costco has reported better-than-expected accelerating comp sales growth, but the stock has not budged. The weak action has purely been sentiment driven due to the reopening trade, and sentiment might have gotten too negative.

We have had a Two rating on COST since early November trade Alert here, but we like the call by Oppenheimer today and agree that long-term-oriented investors can start nibbling here.

We are upgrading our COST rating to One with the shares trading at $335 at the time this was written.