Wednesday afternoon, the Federal Reserve's two-day policy meeting concluded, and the committee left rates unchanged at the target range of 0.00% to 0.25%.

The decision was widely expected by the market, though equities lifted higher following the release of the FOMC statement/projections and throughout Fed Chair Jerome Powell's comments as he was steadfast in his view that the Fed will remain accommodative for the foreseeable future.

One key part in the FOMC statement that reinforced this view was the commitment to increasing their holdings of Treasury securities by at least $80 billion per month and of agency mortgage‑backed securities by at least $40 billion per month "until substantial further progress has been made toward the Committee's maximum employment and price stability goals." Also, Powell reiterated that a "transitory" rise in inflation above 2% caused by the economic reopening does not qualify as a standard to raise rates.

The Fed also provides a dot chart that is perhaps overly scrutinized given the fluidness of the economic outlook but still provides some clues into sentiment on future rate hikes. The chart below depicts where each Fed official believes the appropriate target range is by year-end. 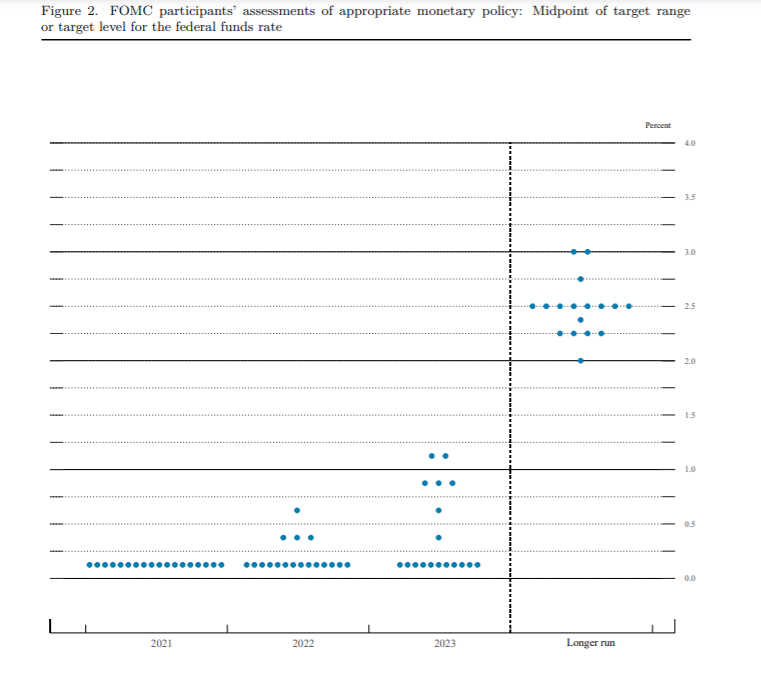 In review of the Fed's economic projections, the committee increased its median projection for the change in 2021 real GDP to 6.5%, which is up from the 4.2% projection they had at December's meeting. In addition, the committee's projection for 2022 and 2023 GDP is now 3.3% and 2.2%, respectively, a change from their prior forecast of 3.2% and 2.4%.

It does not come as a complete surprise to see GDP expectations revised higher for 2021 but zero committee members projecting a rate hike because of this is all consistent with the Fed's new framework of letting the economy run hot. Furthermore, Powell said that the committee "will not act preemptively based on forecasts," meaning that they prefer to remain data-driven in their policy decisions which is a welcomed thing.

Interest rates backed off slightly during Powell's speech and the move lower facilitated a late-day rally in the broader markets, especially in tech where the linkage between the 10-year yield and equity stock remains.

For more information on the Fed's announcement, please see its press release here and its projection material here.