After you receive this alert, we will make the following trades;

After much consideration, we are starting to make some of the prudent portfolio decisions we were contemplating and shared with subscribers last week in our alerts and the AAP Daily Rundown videos. This begins with the downgrade of Wells Fargo shares, which as we noticed in last week's Roundup are sitting on top of the established price target and account for an outsized position of the portfolio's assets. At the same time, we will do some prudent trimming as well to lock in a portion of the portfolio's more than 40% gain in the shares. Wells Fargo will report its quarterly results later this week and based on what we learn, we'll look to revisit the current $48 price target.

With UPS, we are downgrading the shares to a Two from One, and trimming that position back, given our concerns over global supply chain shortages and the sharp increase in fuel costs that could pose a volume as well as cost headwind for the company relative to expectations for the September and December quarters. What we're looking to limit is a repeat of what happened with FedEx (FDX) shares when the company reports its quarterly results, served up weaker than expected guidance, and saw its shares come under pressure. Keeping with the notion behind the Two rating - stocks we would buy on a pullback - we'll look to revisit UPS shares at lower levels given we are heading into the holiday shopping season. UPS will report its September quarter results on October 26.

The portfolio will use a portion of the returned capital from the above two trades to begin an initial position in the shares of semiconductor capital equipment company Applied Materials with a $160 price target. Given the upside to be had, we are rating AMAT shares a One.

As we've discussed in recent days, pain points make for excellent investment opportunities and a very clear one is the need for incremental semiconductor manufacturing capacity if only for the automotive industry. We also know the road to autonomous vehicles means autos will essentially become a "data center on wheels" thereby continuing to increase the semiconductor content per vehicle in the coming years. At the same time, the opportunities behind existing portfolio companies such as Broadcom (AVGO) , Nvidia (NVDA) , Marvell Technology (MRVL) , and even Crown Castle (CCL)  - 5G, IoT, Big Data, AI, AR/VR, data center expansion, and others - will drive continued demand for semiconductors in the coming years.

One of the reasons for the addition of AMAT shares is as much the long-term opportunity outlined above, but also the recent selloff over the last few weeks which sweetens the long-term risk to reward tradeoff in the shares even further. That recent pressure on the shares stemmed from investors looking to lock in gains in AMAT shares given their substantial move over the last year as well as shortsighted views on the likely length of the current upcycle in semiconductor demand. While we can't fault folks for locking in outsized gains, we will take advantage of those not recognizing the long-term drivers at hand.

In terms of our price target, it's a smidge below the Wall Street consensus of $162.70. On a P/E basis, the shares are currently trading at 16.2x consensus calendar EPS expectations of $7.81 and the shares have peaked at an average P/E of 21 during a period of upcycling demand like they are currently in. Our $160 target equates to a modest discount to the historical peak P/E figure. While we could see Applied's business impacted in the near term from supply chains, we will focus on the opportunity to be had over the coming quarters and use any stock price weakness in the next few months to improve our position size and cost basis.

The Technical Take on AMAT Shares 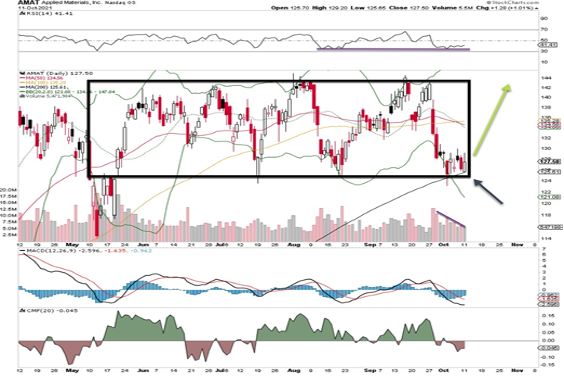 It's hard to find a more consistent pattern of back/forth than what we see with Applied Materials. The big semi equipment company is back in the range where it often launches with higher prices. Further, the stock has now tested the 200 ma, which in the past has been a good area of support (it's been a while, though). Recent volume trends are slight as the stock has consolidated in this 125-128 area.

At the very least, if this stock can get to the top of the box range we are looking at a move to 145 or so, perhaps a 15% rise up from current prices. Note that other indicators are not flashing buy signals, so we'll add this one with a bit of caution. The RSI seems to have hit an area where the stock has bounced before.