After you receive this alert, we will be making the following moves:

- Buy 240 shares of Skyworks Solutions (SWKS) at or near $163. Following the trade SWKS shares will account for 1.0% of the portfolio.

We are modestly reducing the size of Ford shares in the portfolio given that their 35% climb since early March led their position size to reach 5% as of last night's market close. We'd also note the data in yesterday's September Industrial Production Report that showed the production of cars in the U.S. dropped to a record low in September with truck production also down significantly. That, along with already announced plant shutdowns in Mexico and elsewhere due to the current supply chain and auto chip issues, has us taking a more cautious approach with the shares in the near-term. We continue to see the long-term opportunity in the company's transformation, however, we also need to be prudent stewards of the portfolio as well as freeing up some capital to put to work in the new positions we are today this morning.

Alongside that Ford trimming, we will also downgrade the shares to a "Two" rating given roughly 9% to the portfolio's $17 price target, which compares to the Wall Street consensus price target of $15.56.

Starter Positions in Blackberry and Skyworks

In the last few weeks we made some moves to build up the portfolio's cash position to both help insulate it from any earnings related market volatility, but also to allow us to slowly add new positions to the portfolio that have favorable growth prospects ahead. Today we are starting to deploy that capital with starter positions in the shares of Blackberry and Skyworks.

While some still confuse the company for a smartphone manufacturer, its focused is on cybersecurity and the IoT market, with a strong presence in the automotive industry. As we discussed on today's AAP Daily Rundown, as much as we are bullish on what 5G will bring in terms of IoT and connectivity, effectively moving mobile past smartphones, tablets and wearables, it will also bring with it a target rich environment for bad actors. In short, we see cybersecurity as the dark side of 5G and IoT, and pain points like that call out for solutions.

Why Blackberry and Why Now? When we look at the company's partners and customer base, particularly in the automotive and government markets that includes Amazon (AMZN) , Nvidia (NVDA) , Qualcomm (QCOM) , Ford Motor, and 24 of the world's top 25 EV companies. Its strong position in auto springboards from its QNX cockpit software, makes it extremely well positioned for the intersection of auto meets IoT meets cybersecurity. Blackberry is also in the midst of selling its mobile patent portfolio, which should add to its already cash rich balance sheet as well as finish its transformation into a pure play cyber-IoT company. Excluding the potential impact of the patent sale, our price target on BB shares is $14 and that offers ample upside to warrant a "One" rating.

Blackberry Seems Quite Ripe for Picking

We saw Blackberry surge higher in early summer as the WallStreetBets crowd pushed the stock to multi year highs in the $20 range. Since then the stock has glided lower and trades now in an area it's familiar with - low teens. That may not last for too much longer given the opportunity with the company's rich patents. But on the chart, we see 9-10 level as a good entry point, with the MACD now turning up and the stock moving towards the 200 ma. If that level is reached this stock has room to run, perhaps towards $15 and then the June highs, but that could take a while. Volume trends are turning positive as this technology name is starting to look interesting to big money players. 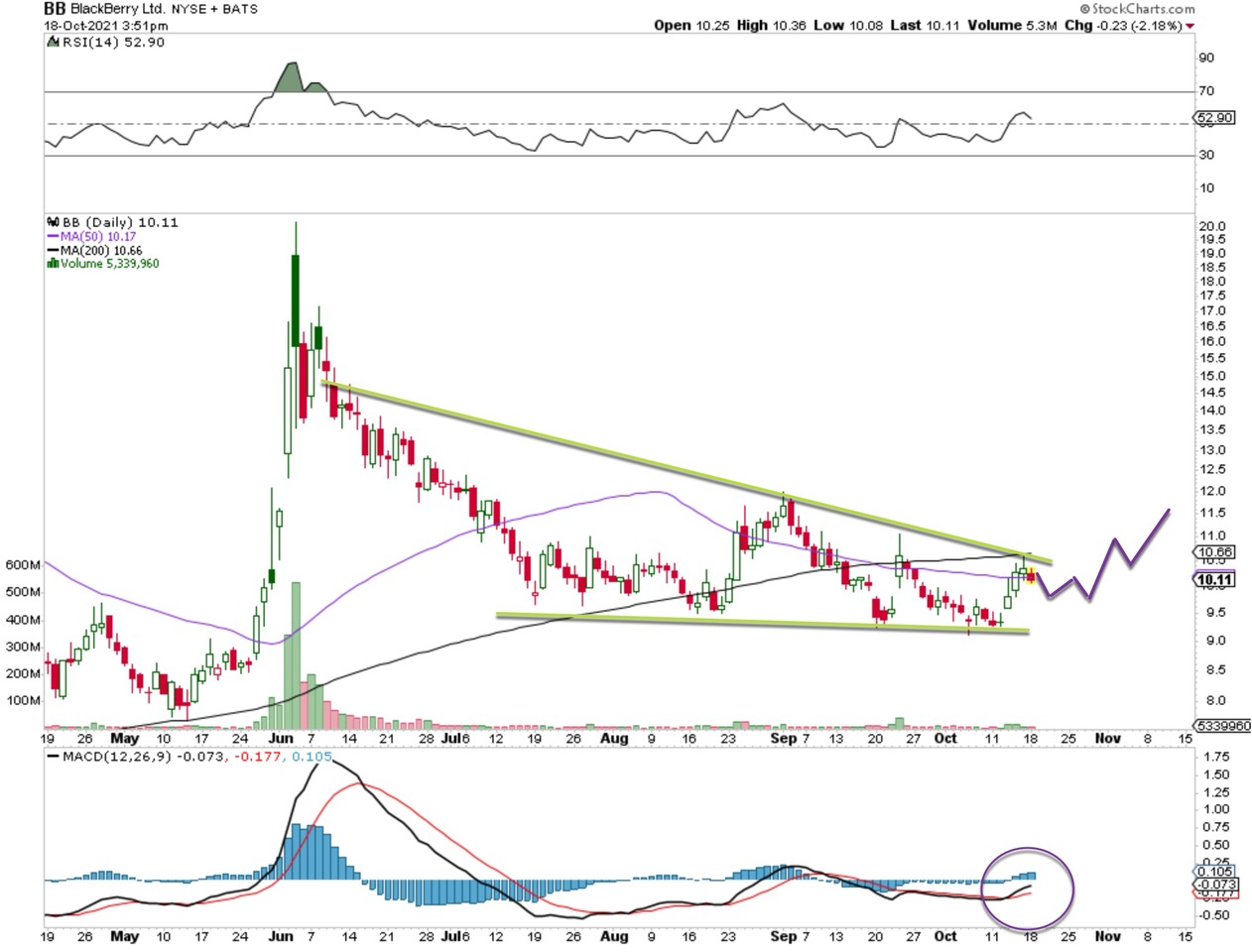 We recently added the shares of Skyworks to the Bullpen, and following last week's move lower, which culminated in its sharp pullback off their $204 52-week high. In our view, most of the potential risk associated with the semiconductor chip shortage is priced into the shares, while we are still in the very early innings for the multi-year opportunities associated with the 5G smartphone upgrade cycle and IoT. As subscribers might suspect, the company's customers are the who's who in the smartphone business but once again Skyworks's revenue should handily outpace smartphone shipments. This is because each new G adds additional frequency bands per smartphone, which drives greater demand for RF chips per smartphone.

This is not a new concept as Skyworks's RF dollar content has steadily risen from $3 per 2G device to $8 per 3G device to $18 per 4G device and $25 per 5G device. As the smartphone industry moves to 4G and 5G from 3G and 4G across the globe, that drives a powerful revenue opportunity for Skyworks. The company recently acquired the Infrastructure & Automotive business of Silicon Laboratories (SLAB) a move that tell us the company is looking to leverage its RF chip expertise as those market become increasingly connected. We'd also note the company has a solid balance sheet and is currently paying a quarterly dividend of $0.56 per share, and we like the company's policy on returning capital to shareholders via increasing dividends.

Similar to the addition of Blackberry shares, we are starting off with a small SWKS position and intend to build it out over time. Our 12-18 month price target for SWKS shares is $210, and we are adding the shares with a "One" rating.

Skyworks is Looking for a Solid Bounce 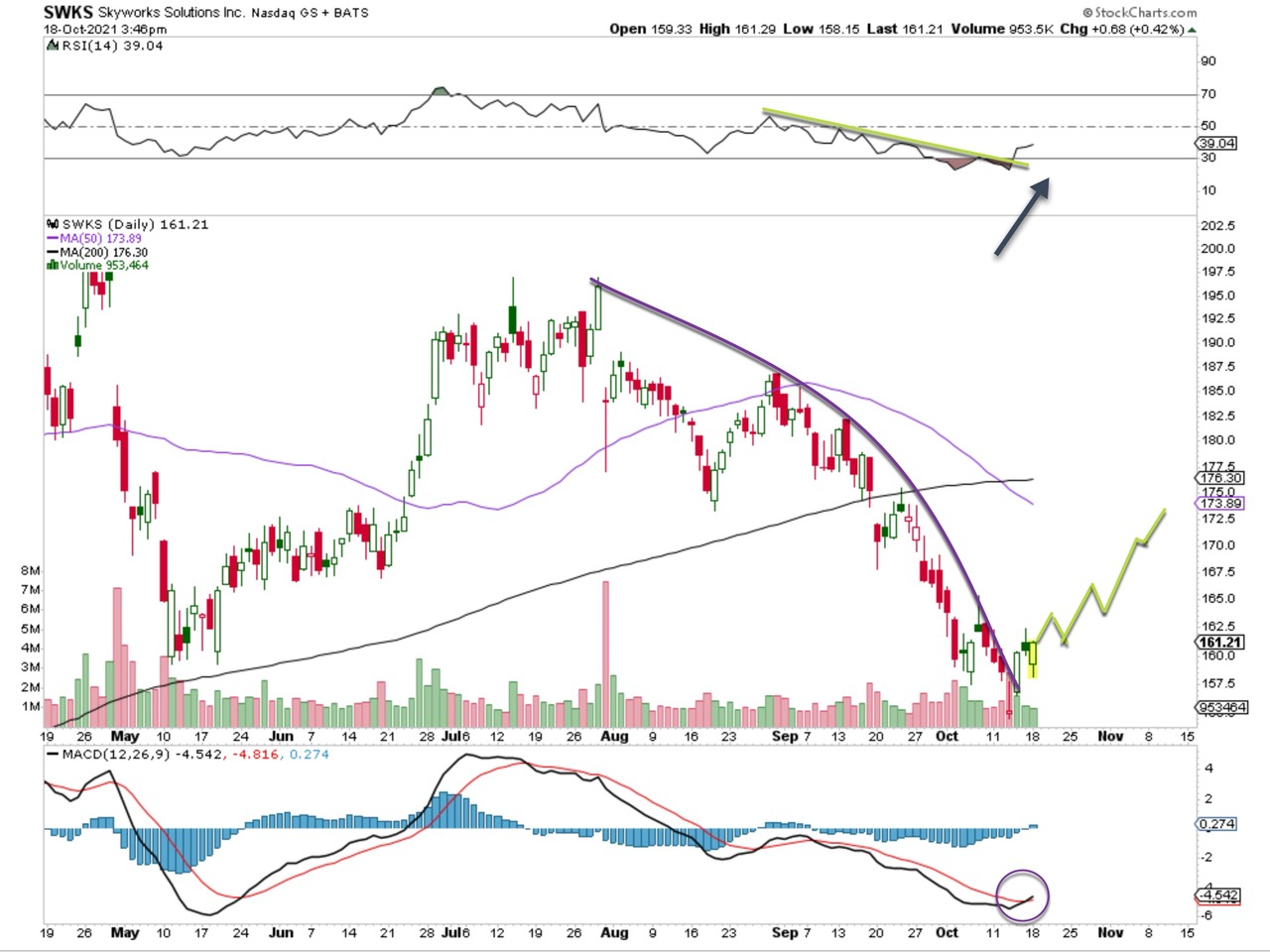 After pulling back sharply from recent highs in July, Skyworks has been finding some support in the low $150's area. This seems a zone where the big buyers are picking up the stock, and we like this for a purchase. The MACD is starting to wake up again, recent death cross is notable but we are seeing a nice divergence here. Positive volume trends are starting to occur, and the RSI has broken the downtrend line. We could see this stock make a near term run towards the 200 ma around $176 or so, a nice move up from current prices. We'll tip toe into the stock and look to add more on strength.