After you receive this alert, we will make the following trades:

With Union Pacific having recently reported its December quarter results, and the shares closing in on our price target, we're opting to trim back the position size for this Two rated holdings. As we reduce the portfolio's exposure to a respectable 3% position size, we'll take a some of those gains along with those from yesterday's trim in Abbott Labs (ABT) and initiate a starter position in the shares of AMN Healthcare to capitalize on the pain point to be had in healthcare staffing. As we discussed earlier this week, this is a problem that will only be exacerbated by the drivers of our Aging of the Population investing theme. With upside to $125, we are ranking the shares a One, and we'll look to either build out our position size on weakness or as signs of demand for the company's services grow quicker than expected. As AMN shares approach the $110 level, we would look to revisit our initial One rating.

In terms of the technical view on AMN shares, the chart has been volatile but also shows some volume strength of late. As we see from this weekly chart, below, the shares are in a box, but we believe this entry point is an excellent low risk area to add the shares. The RSI and MACD show oversold levels, and the stock seems to be washed out of sellers in the low 90's. We wanted to wait until the heavy selling subsided, and that seems to have occurred. Though AMN did have some strong volume and price bars downward in October and November, we still feel this is a good price level to get started. We'll continue to build into this position as the chart improves. 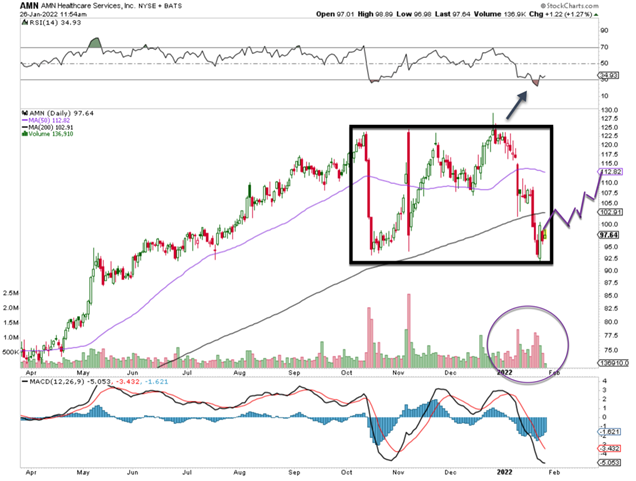