Several weeks back we added the shares of ChargePoint (CHPT)  to the Bullpen to keep a close watch on the name. One of the pain points associated with electric vehicles is the distance they can travel compared to a gas-powered car or truck. Yes, strides are being made in EV batteries, but even with gas-powered vehicles, we need to fuel up depending on how long we've been out and about. With EVs, this refueling, or re-charging, pain point has been one of the items cited by folks who have been hesitant to move from a traditional vehicle to an EV. But as we have said, pain points -- whether they're tied to our aging population, the chip shortage or EV charging -- tend to cry out for a solution. We want to be invested in those companies with the best solution and at the right time.

Earlier this month, the U.S. Departments of Transportation and Energy announced nearly $5 billion over the next five years that will be made available under the new National Electric Vehicle Infrastructure (NEVI) Formula Program established by President Biden's Bipartisan Infrastructure Law. The aim of NEVI is to build out a national electric vehicle charging network of high voltage chargers along designated Alternative Fuel Corridors, particularly along the Interstate Highway System.

The total amount available to states in Fiscal Year 2022 under the NEVI Formula Program is $615 million. States must submit an EV Infrastructure Deployment Plan before they can access these funds. A second, competitive grant program designed to further increase EV charging access in locations throughout the country, including in rural and underserved communities, will be announced later this year.

The framework leaves more detailed questions unanswered about how the chargers should work, but officials said they will issue technical standards in the coming months. 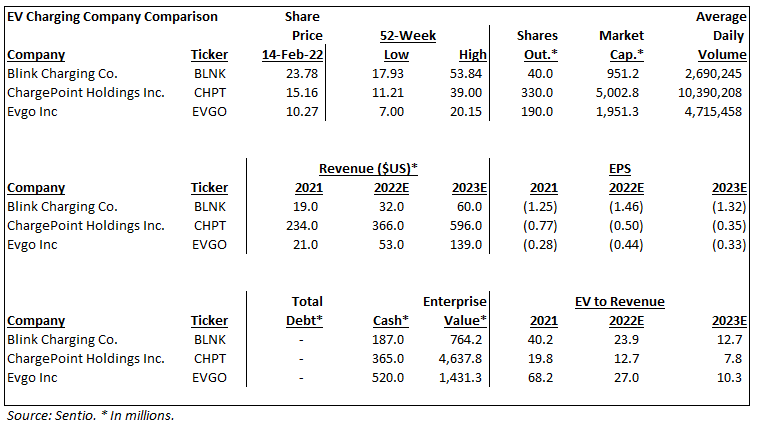 States have until Aug. 1 to submit plans for using the money. If states don't submit a plan or don't take steps to implement it, the federal transportation department can withhold money or give it to local governments. The Federal Highway Administration is set to approve plans by Sept. 30.

There are roughly 116,000 public charging ports in the country, according to data from the Energy Department. These stations are mostly lower speed "Level 2" chargers that are heavily concentrated in California. Cost estimates for installing chargers vary widely. Tesla (TSLA) has proposed the government cap costs at $75,000 per port, which would mean 80,000 chargers with the new federal funding and matching state dollars. On a combined basis that suggests roughly 200K total charging stations, which is a long way off from President Biden's stated goal of 500,00. This likely means other incentives could be had to help close that gap.

We added CHPT shares to the Bullpen in late December and the shares have fallen roughly 20% since. The catalyst for that drop as well as the drops in EVgo (EVGO) and Blink Charging (BLNK)  is the market, at least for now, falling out of love with companies that do not generate earnings. As we can see in the table below, none of those three companies are slated to deliver earnings per share until sometime past 2023.

Even though all three names are seeing some lift with the market rebound, odds are they will be somewhat rangebound until we have a much clearer sense as to Fed monetary policy and we have more granularity on the Biden plan, including when funds will be released -- and projects begin to happen. Based on what we know, it looks like the soonest that could happen would be in the December quarter.

We'll continue to monitor developments on these three companies, looking to graduate the best one to the portfolio when the time is right.