After you receive this Alert, we will initiate a position in ChargePoint Holdings  (CHPT) , buying 2,230 shares at or near $17.00. Following the trade, CHPT will represent roughly 1.0% of the portfolio.

Average gasoline prices hit $4.25 per gallon today, marking a new all-time high as it eclipsed the prior peak of $4.11 set in July 2008. With the U.S. banning Russian oil imports and prospects for the European Union to do the same, gas prices will likely continue to trend higher.

Near-term, there isn't much relief to be had, but at the margin we're likely to see renewed interest in electric vehicles (EVs) as consumers look to escape the pinch of higher gas prices. That likelihood has us revisiting EV charging station company ChargePoint.

The company recently boosted its revenue outlook for the coming year to $450 million-$500 million vs. the $380 consensus. ChargePoint recorded $81 million in revenue for its January quarter. That $81 million was comprised of:

Viewed from a different perspective, the company's revenue mix was 74% commercial, 14% fleet, 10% residential and 2% other. Commercial customers have parking places largely within their workplaces and includes retail, hospitality and parking-lot operators. Fleet includes municipal buses, delivery and work vehicles, port/airport/warehouse and other industrial applications, ridesharing services, and is expected to eventually include autonomous transportation. Residential includes single-family homes and multifamily residences. Exiting its January quarter, ChargePoint had a total of 174,000 activate charge points with 51,000 in Europe.

As we recently discussed, the U.S. Departments of Transportation and Energy have announced nearly $5 billion that will be made available over the next five years under the new National Electric Vehicle Infrastructure (NEVI) Formula Program established by President Biden's Bipartisan Infrastructure Law. The eventual release of those funds should lead to a significant expansion of not only commercial charge points but also those for ChargePoint's fleet business, while continued EV adoption should foster continued growth at its residential business.

To that end, website EVAdoption forecasts 0.8 million EVs will be sold in the U.S. this year, growing to 2.7 million units in 2026, leading to a total EV install base of 10.2 million units by 2026. We have exposure to that opportunity already within the portfolio through Ford Motor (F) , but as EV adoption unfolds, we are likely to see EV penetration start to rise above one per household. That will likely translate into demand for more than one charge point per home similar to how smartphone per household penetration drove demand for multiple chargers and charging cables. Over that time frame we should also see growth in other forms of EVs -- spanning light, medium and heavy-duty commercial EV trucks, buses, and other recreational vehicles including motorcycles, ATVs, and golf carts. That in turn should drive demand for additional charging points.

Meanwhile, the European electric vehicle market is expected to witness robust growth in the coming years owing to efforts by countries to reduce carbon emissions in the EU. That was already expected to drive the EV charging point market but with the EU looking to cease buying fossil fuels from Russia by two-thirds by the end of this year and altogether by 2030, we could see an even greater push for EVs. According to the International Energy Agency, the EU imported around 45% of its gas from Russia last year.

With a bright multi-year opportunity that has the backing of federal funding and is poised to accelerate in the coming quarters, we're establishing a 12-18 month price target for CHPT shares of $27. That target equates to a modest discount to the 13.1x enterprise value-to-revenue multiple currently being accorded to Blink Charging (BLNK) .

At the end of its January quarter, ChargePoint had $315.2 million in cash on its books and no debt, which offers ample staying power as the federal funding gets underway. As that funding spigot for EV charging stations is opened and begins to flow, we'll look to revisit that target -- especially as ChargePoint's activation port network expands in the coming years and EV adoption does the same.

After a deep correction from recent highs we saw this EV supplier build a modest base around the $10-13 level. It appears the correction is over and now we see a bullish pattern of higher lows and higher highs. That pattern has propelled the stock above the 200-day moving average.
There is clear resistance at the 50-day moving average, but that is a good $6 higher. We like CHPT's chart -- relative strength is impressive as the rest of the market struggles to find its footing. A continuation of this week's gain would be constructive; Moving Average Convergence Divergence (MACD) has turned up with a buy signal.
https://share.trendspider.com/ chart/CHPT/4669hlkxsy 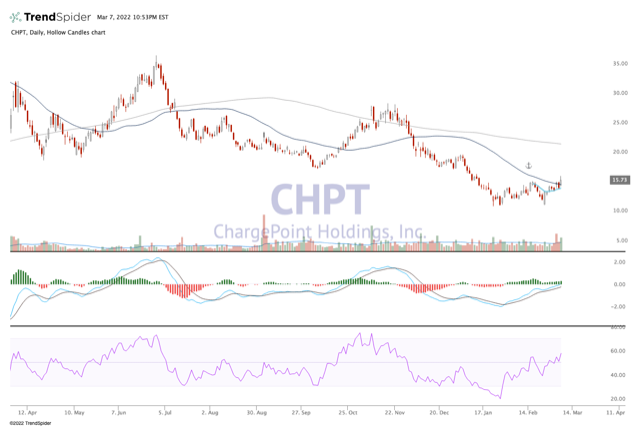