After you receive this alert, we will make the following trades

This morning we are exiting Three-rated NortonLifeLock, a position that we've previously described as essentially "dead money" given the continued pushouts for its pending acquisition of Avast plc due to regulatory scrutiny. Given the prospects for cybersecurity spending to continue to surprise to the upside as companies, governments and other institutions contend with not only the increasing frequency of cyber attacks but the changing nature of them as well, we are swapping the portfolio's position size in NLOK shares for one in the First Trust Nasdaq Cybersecurity ETF.

The rationale for this is summed up rather well in our view from consulting firm McKinsey & Company, which just a few week ago shared:

"Cybersecurity has always been a never-ending race, but the rate of change is accelerating. Companies are continuing to invest in technology to run their businesses. Now, they are layering more systems into their IT networks to support remote work, enhance the customer experience, and generate value, all of which creates potential new vulnerabilities.

At the same time, adversaries-no longer limited to individual actors-include highly sophisticated organizations that leverage integrated tools and capabilities with artificial intelligence and machine learning. The scope of the threat is growing, and no organization is immune. Small and midsize enterprises, municipalities, and state and federal governments face such risks along with large companies. Even today's most sophisticated cybercontrols, no matter how effective, will soon be obsolete."

In our view that strongly suggests cybersecurity spending in 2022 and 2023 will once again prove to be stronger than expected much the way it was in 2021, 2020, and 2019. According to new findings by Grand View Research, the global cybersecurity market is projected to reach $500.7 billion by 2030, growing at a compound annual growth rate of 12% over the 2022-2030 period.

With 5G powering the IoT market across industrial, home, auto, healthcare, and other applications as well as newer technologies giving rise to more connected devices, there is little question about the expanding addressable market for cybersecurity and data privacy.

As we shared with members, the move we are making today, swapping NLOK shares for CIBR ones, is designed to give us broad-based exposure to that increase in cybersecurity spending captured across 41 cybersecurity and data privacy holdings, including NortonLifeLock. Among the key holdings in this ETF are the who's who companies in cybersecurity - CrowdStrike (CRWD) , Palo Alto Networks (PANW) , Zscaler (ZS) , Cloudflare (NET) , and Splunk (SPLK) , among others.

While there are other cybersecurity focused ETFs, our analysis shows that not only is CIBR the largest by assets under management and the most liquid, but its mix of cybersecurity constituents is also ideal. By that we mean it focuses on companies that drive a meaningful amount of revenue for cybersecurity and data privacy as opposed to others like the ETFMG Prime Cyber Security ETF (HACK) that while it has a catchy ticker its liquidity is much lower, and its constituent base contains some companies whose revenue are not as tied to cybersecurity spending.

As we add CIBR shares to the portfolio, based on the earnings power of the constituents we are establishing a $62 price target. In terms of downside, CIBR shares have strong support at the $44 level (see the more complete technical review below), which is leading us to rank CIBR a Two.

Our plan will be to build out the position size on pullbacks, but we also recognize the history of cybersecurity stocks spiking on the news of a large-scale attack. We would rather have a few toes in the pool with CIBR than potentially kick ourselves for not being involved should such an attack occur. Given the increasing prevalence of cyberattacks in general but especially with the growing tension with Russia, the probability of such an attack is higher than not in our view.

Technicals: CIBR is the ETF of Choice

With so much concern over cybersecurity and trying to get ahead of the 'bad actors' in the world, a plethora of names have come out to fight the good fight. But it's not easy finding the one or two names that will win this battle, which is likely continuous. The CIBR ETF is a perfect way to gain exposure to the group with several names. If we look at some of the individual issues in this broad ETF the charts are a bit more erratic, but CIBR presents a much better picture of things. The daily chart (blue, chaikin) is bullish and on a buy signal, you can see the formation of a bullish cup/handle too, with a breakout imminent over $54. Money flow is strong and robust, the RSI also flashing a buy signal here, too. 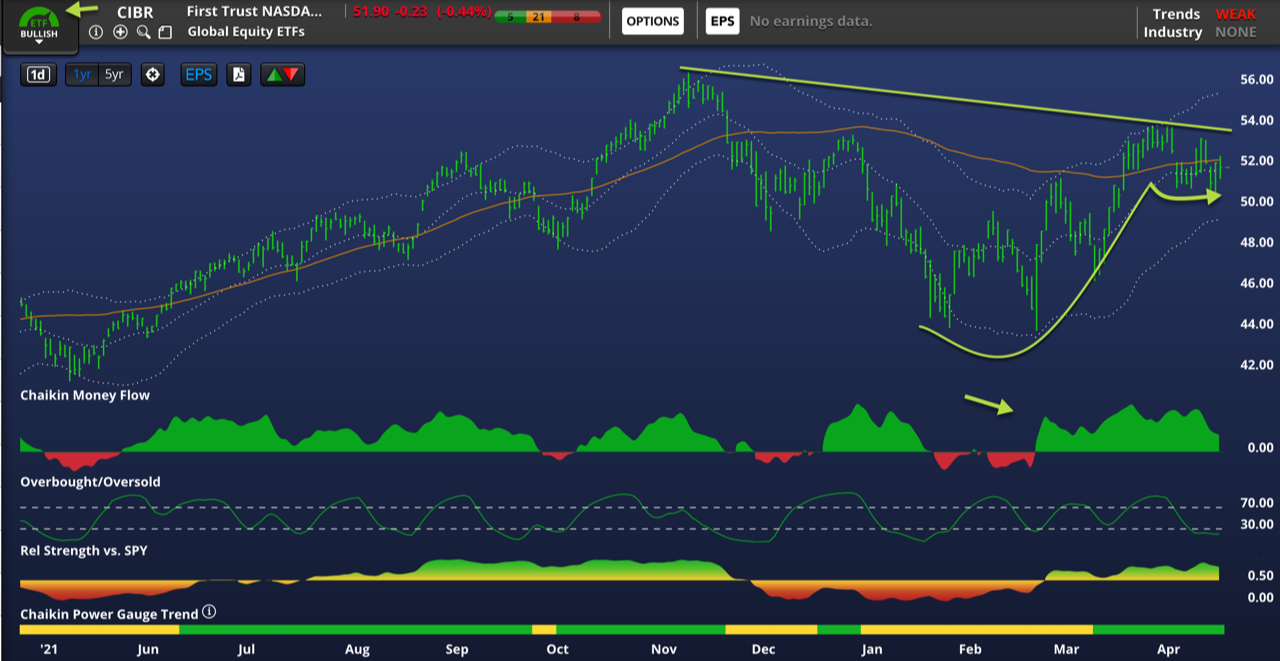 Meanwhile, the weekly chart (TrendSpider) also shows a similar cup/handle pattern. Volume trends re slowing down, but the MACD is on a buy signal crossover and that could last awhile. All in all, this chart shows us good support at 44 but ultimately a move over 53 or so would be very bullish. 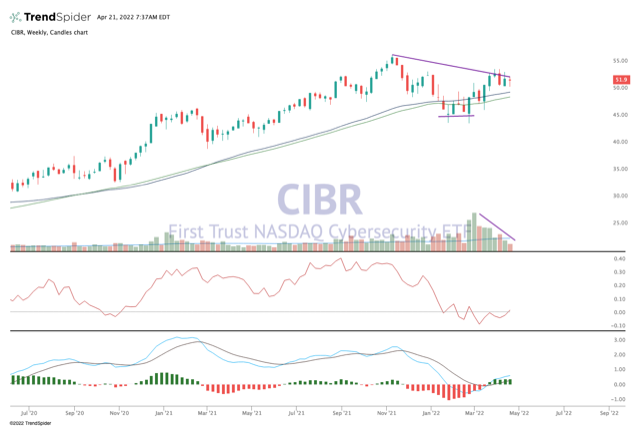