After you receive this alert, we will buy 230 shares of American Water Works (AWK) at or near $151.50. Following the trade, the portfolio will own 230 AWK shares, roughly 1.0% of the portfolio.

This morning we are upgrading the shares of American Water, the largest public water utility that brings regulated and regulated-like drinking water and wastewater services to more than 14 million people in 24 states. We like the sticky nature of the water utility business, especially as we move deeper into the seasonally stronger time of the year for water demand.

Because there is usually only one water utility available, the business has a rather wide moat, and the company has used its scale and balance sheet to acquire smaller, regional water utilities thereby further expanding its scale.

Roughly 92% of the company's business is regulated and leans considerably toward water services, primarily for residential and commercial use. Combined those two water service markets account for 70% of American Water Works operating revenue. According to data published by the U.S. Environmental Protection Agency, the average American family uses more than 300 gallons of water per day at home, 70% of which is used indoors. Data from the Water Research Foundation breaks down the average daily household water usage as such:

That its overall residential revenue accounted for more than 60% of its water and wastewater operating revenue in 2021, the company's revenue stream is rather nicely insulated from economic environment. During the Great Recession, the company's operating revenue fell just 2% to $2.29 billion in 2009 vs. 2008. That performance helps explain why the beta associated with AWK shares is 0.44, which means they tend to be considerably less volatile than the overall market, which has a beat of 1.0.

Given the choppy year-to-date performance of the market, even AWK shares have been more volatile than in the past, but over longer-term the captive and inelastic nature of its business is something we find rather attractive, especially given reasons as to why American Water Works' revenue is likely to be even more insulated than in past recessions.

There are two reasons for that, with the first being the management teams continued focus on nip and tuck acquisitions in the range of 5,000 to 50,000 customers.

The second is that periodically like other water utilities, American Water Works petitions a state's public utility commission (PUC) for rate increase requests as it looks to recoup investments in water and related infrastructure as well as earn an appropriate rate of return on its investments. For 2022, the company has won rate increases for its Pennsylvania, California, and West Virginia water utilities, which in total accounted for nearly one-third of its operating revenue in 2021.

American Water Works also has rate cases filed in New Jersey, Illinois, and Pennsylvania, and ratemaking proceedings were approved and set to become effective on July 1. As these rate increases take effect, we should see a nice year over year increase for the company's revenue, particularly during the company's September quarter.

As American Water Works calls out in its 10-K filings, "Weather that is hotter and/or drier than average generally increases operating revenues, whereas weather that is cooler and/or wetter than average generally serves to suppress customer water demand and can reduce water operating revenues." And this year, according to the recently released updated weather outlook from The Weather Company, summer 2022 is expected to be hotter than average across a broad swath of the U.S. That would be a positive for water consumption and American Water Works, particularly on the back of rate increases realized between September 2021-July 1, 2022.

As we shared when we added AWK shares to the Bullpen, those and other pending rate increases under pin the company's 7%-9% annual EPS growth targets between now and 2026, which implies potential EPS between $5.50-$6.00 in 2025 vs. the $3.98 achieved in 2021. While some may bill the company as having a sleepy business, we like the inelastic nature of the business, which paired with the company's penchant for increasing its annual dividend should lead to a steady increase in the share price over the coming years.

As a reminder, management targets growing its annual dividend to shareholders between 7%-10% after having raised it by 9.6% over the last several years. That latest increase to $0.6550 per share per quarter was paid out today (June 1) to shareholders of record on May 10. The next quarterly dividend payment, if history holds, should be paid in early to mid-August and we would expect more definitive timing to be announced in the next several weeks.

As we begin this starter position in AWK shares, our price target is $165, which equates to 33.8x expected calendar 2023 EPS of $4.88 and a dividend yield of 1.7% on the calendar 2023 consensus dividend of $2.80 per share. For a frame of reference, AWK shares have peaked over the 2015-2021 period at an average P/E multiple of 34.4x and a dividend yield of 1.8%. We would look to revisit our Two rating should AWK shares pull back near $145 or rate increase news that is greater than expected. Longer-term we would look to revisit our price target as the company executes on its dividend increase targets.

This new name is one that we have liked for some time. It seems to be one of those hidden gems, AWK seems to fly under the radar. But this is certainly not a high beta name and offers a nice, healthy dividend. That said, the chart is rather constructive here, we like the 145 level as good support for AWK as the money flow starts to improve. 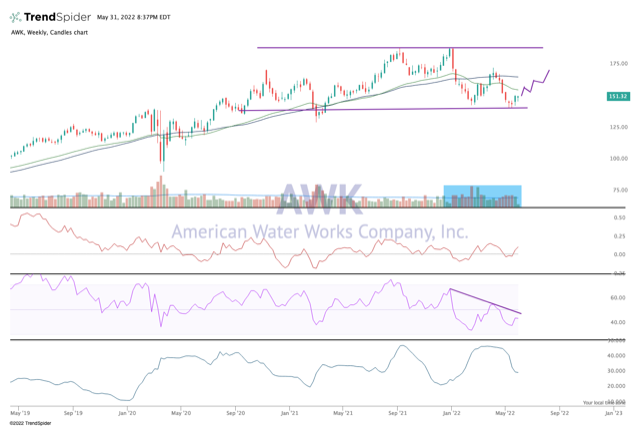 The weekly chart (trendspider, above) shows a solid double bottom is in place at the 145 level, and a target of 185 is a reasonable objective over the next few months. Volume trends have been a bit bearish of late but we'll give the benefit of the doubt to the moderating price action. 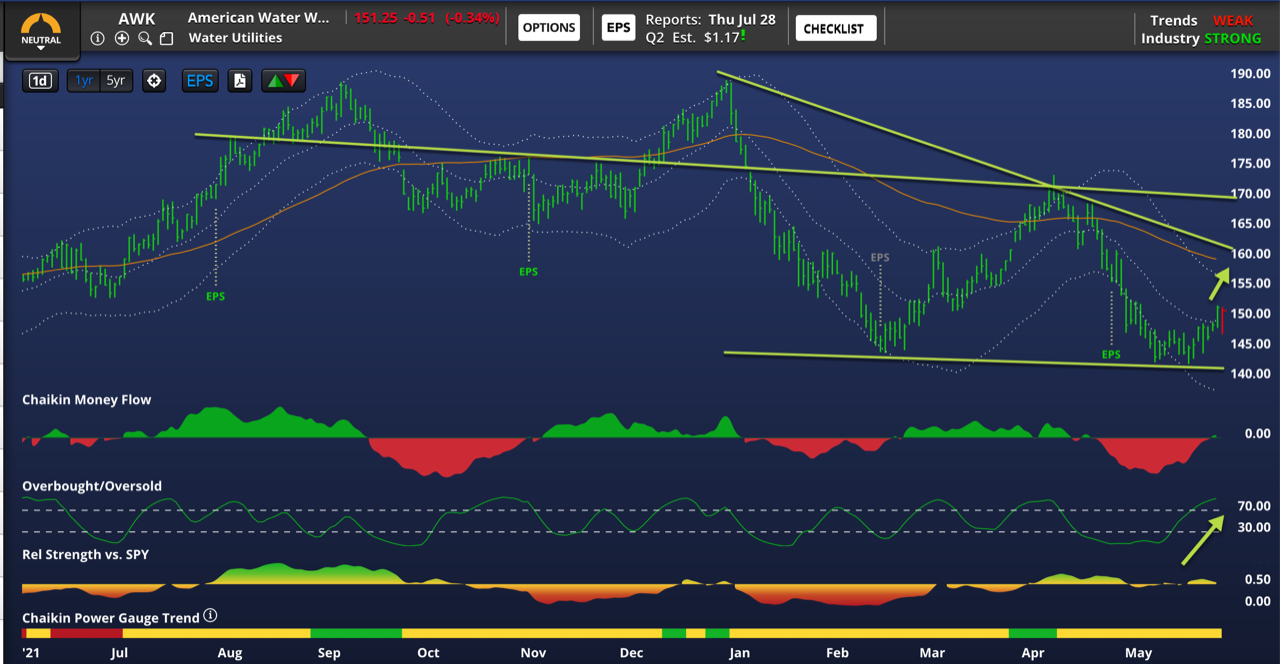 The daily chart (chaikin, blue, above) shows a good support level around the same area, with strong resistance overhead at the 165-175 area. Again, this offers a nice reward if AWK can trade back to the top of the range. We'll look to reassess, and add more on a pullback.