We are making this move with Apple shares following the sharp cut to guidance for the current quarter from Micron (MU) as well as reports semiconductor fab Taiwan Semiconductor (TSM) , an Apple partner, is seeing major clients adjust downward their chip orders for the rest of 2022. While Micron pointed to continued strength in the data center market, it specifically called out a sharp turn in the smartphone market on its earnings conference call last night:

While data center is now the largest end market for memory and storage, the smartphone market is the second largest market for Micron. Juxtaposing those two comments, it suggests the smartphone weakness accounts for a large part of its guidance shortfall and year over year decline in revenue expectations for the current quarter.

Micron's revenue guidance for its March quarter is $6.8-$7.6 billion vs. the expected $9.17 billion and the $8.27 billion booked for its August 2021 quarter. As we shared in our note to members yesterday, Micron's August quarter tends to benefit from the seasonal ramp in new smartphone models to be had ahead of the holiday shopping season.

Its guidance suggests that ramp is going to be weaker than expected, especially for non-5G models and that will impact not only Apple's revenue but also that for other smartphone companies and therefore key suppliers as well.

Turning to Taiwan Semiconductor, the comments making the rounds that it too is seeing order cancellations adds to our cautious stance given the smartphone market accounted for 40% of its March quarter revenue, essentially tied as with High Performance Computing for its largest end market.

This increased risk for Apple's largest end market is leading us to trim back the portfolio's position from an outsized one to limit the impact of further downward moves in AAPL shares in the coming weeks as smartphone suppliers, including Qualcomm (QCOM) , Skyworks (SWKS) , Qorvo (QRVO) and others report their quarterly results and update their guidance for what's to come in 2H 2022.

Similar to our comments when we trimmed back and downgraded Amazon (AMZN) shares, we look forward to buying back AAPL shares in the coming months as the outlook for the smartphone market and other Apple products firms and more than likely doing so at prices below where they are today. We will also keep close tabs on Bullpen resident QCOM shares as well.

And while there will be those that point to Apple's buyback program, while that could help bolster EPS comparisons were it to use that program in size, we have to acknowledge that it has no impact on its top line or its comparisons. In this environment where recession concerns are on the top of minds, weaker than expected revenue comparisons are likely to carry even more weight than they have in the recent past.

The continued strength in the dollar and foreign exchange concerns are other issues for its revenue comparisons, and that's likely why Apple announced a 20% price hike for iPhone in Japan this morning - a move that makes the product that much more pricey and runs the risk of curbing demand. We'll be looking to see if other pricing moves are had in other key markets, including China and Europe.

Given those near-term prospects, we are also downgrading AAPL shares to a Two from One and reducing our price target to $160 from $200.

While Apple has been a stalwart name in the AAP and other portfolios for years, there is some concern here the stock may soon be under pressure. When evaluating stock charts, we need to be objective, stoic and deliberate in our actions. Taking a no-nonsense approach and calling the stock chart for what it is rather than what we want it to be. Owning Apple for the long term has been a smart move, but there are times to take some profits off the table and that time is now.

Looking the weekly chart here, the double top is in place and clearly seen, from late 2021 into April 2022. The stock broke down sharply in April and continues to make lower highs, lower lows. The indicators support the price action in the chart, take a look at the downtrend in money flow and RSI. The stock has performed like a champ in past market corrections, but not this time. In fact, the current price seems vulnerable to more selling over the coming weeks. Volume trends are bearish and getting stronger by the week. 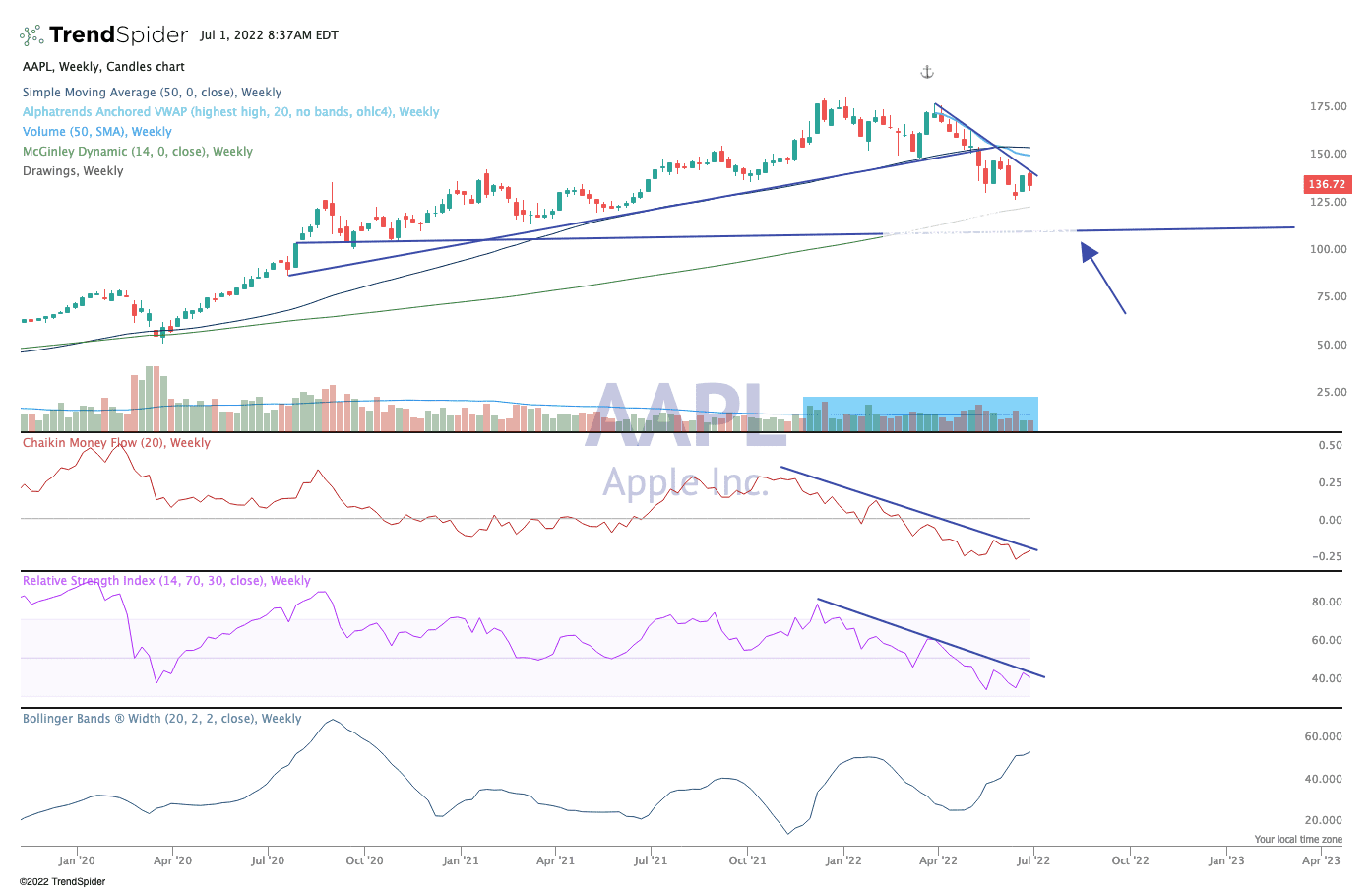 There is support around the 114 area and further below at 105, ultimately the 200-week moving average is right near 100 bucks. If that area were probed, we are talking a 40% drop. In this very challenging economic environment, anything is possible - so why do we need to hold the stock through that hailstorm? However, we could see room to go up to 150 or so on a bounce, and that would be a level we could take more shares off the board.

Alongside that downgrade, the prospect of near-term excess manufacturing capacity at Taiwan Semiconductor and other foundries and potential recession concerns could lead to a pushout in semiconductor capital equipment orders and perhaps even some order book cancellations. While that would impact the near-term for Applied Materials (AMAT) the longer-term demand capacity needs to continue to be higher than they are today as next generation technologies come to market.

While we navigate the near-term, we suspect that Applied, much like Apple, will use their buyback programs while we collect dividends from both. That said, we are also downgrading AMAT shares to a Two rating given the potential for capital spending cuts to emerge from the chip sector during the June quarter earnings season. As we make that move, we will also reduce our price target to $135 from $165.