After you receive this alert, we will make the following trades:

While letting go of a stock is never easy, we are exiting the portfolio's position in "Two"-rated Applied Materials, given risk of further downside in the near-term. The reasons for the risk include a slowing economy and higher interest rates reducing near-term demand for new chip equipment while we wait for the ramp of CHIPS Act related spending to hit in the second half of 2023. There are also dollar headwinds for Applied, a company that derives roughly 88% of its revenue from outside the U.S. In addition, we have potential uncertainty with further moves out of Washington to restrict the sale of certain chips and chip equipment to China, a market that accounts for 25%-30% of Applied revenue. 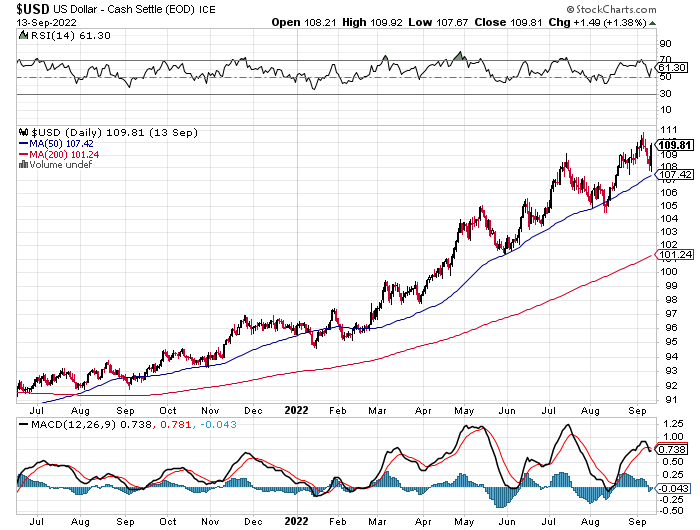 In our view, all this skews the near-to-medium term more toward the risk side of the ledger, especially given the lack of a near-term pronounced catalyst to drive the shares higher.

On the September Members-Only call we shared that one mistake was not exiting Nvidia (NVDA)  shares in full on Aug. 23, as the subsequent news led to our closing out the remaining shares at a much lower level. We do not want to make that mistake with AMAT shares.

In terms of "why now?" -- on Tuesday, Applied competitor KLA Tencor (KLAC)  spoke at the Goldman Sachs Communacopia conference and shared supply chain issues remain very challenging with the impact lasting at least through the March 2023 quarter. We see those comments pointing to margin pressure continuing in the near-term. In terms of the CHIPS Act, KLA pointed to the longer-term opportunity, which suggests it will be a few quarters until that spigot is really flowing. This strengthens our view that we could see a something akin to a no-man's land between the industries supply chain issues being resolved and the start of CHIPS Act dollars being released.

To be clear, over the long-term we certainly see the need to add additional semiconductor capacity given the growth in 5G, the number internet-connected devices, electric vehicles, and other markets. It's the coming six to nine months that looks more challenging and could see the shares move even lower.

In terms of the technical picture, there is little doubt the trend for Applied Materials is down. Since the start of the year, it has been lower highs, lower lows as this weekly chart shows. But now there is some serious support being challenged, and that means we need to cut bait. We have given this stock the benefit of the doubt but now the bears have re-captured the momentum. How far down? There is support around the $81 level, which is 10% lower than current prices. That not where we want to go, and while the company may be seeing good business down the road, the chart is telling us investors do not care at the moment. Notice the poor relative strength here with lower highs and lower lows. The Traders Dynamic Index (TDI) indicator shows the bottom is weak. 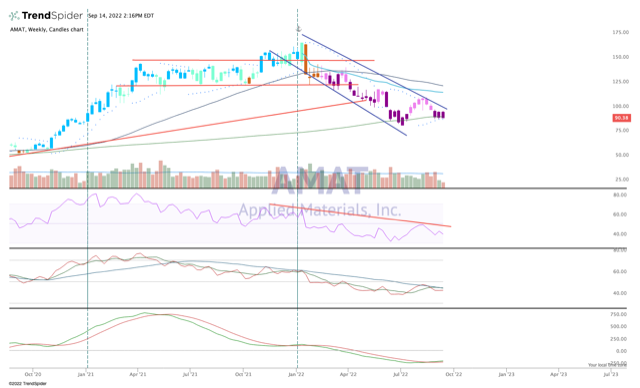 (To see this chart in more detail, click here.)

As we exit AMAT shares, we will place them into the Bullpen and use a portion of the returned cash to fund the latest buys in AWK and CBOE shares. The net effect of these trades will add to the portfolio's cash position, but on our shopping list are the shares of AMN Healthcare (AMN)  closer to $100, Vulcan Materials (VMC) , and United Rentals (URI)  as well as the Energy Select Sector SPDR Fund (XLE)  shares.