We started a position in Lockheed Martin (LMT)  with a "Two" rating on Thursday and a $450 price target. Here's why we chose Lockheed over others in the defense space.

U.S. defense spending has spurred investor enthusiasm for defense stocks and helped Lockheed consistently increase its dividend. That spending is expected to continue to rise consistently over the coming decade, which means those players are likely to once again be a safe haven during shaky economic times. The reason, which we can see in the above chart is the U.S. government budget, especially military spending, tends to remain stable. 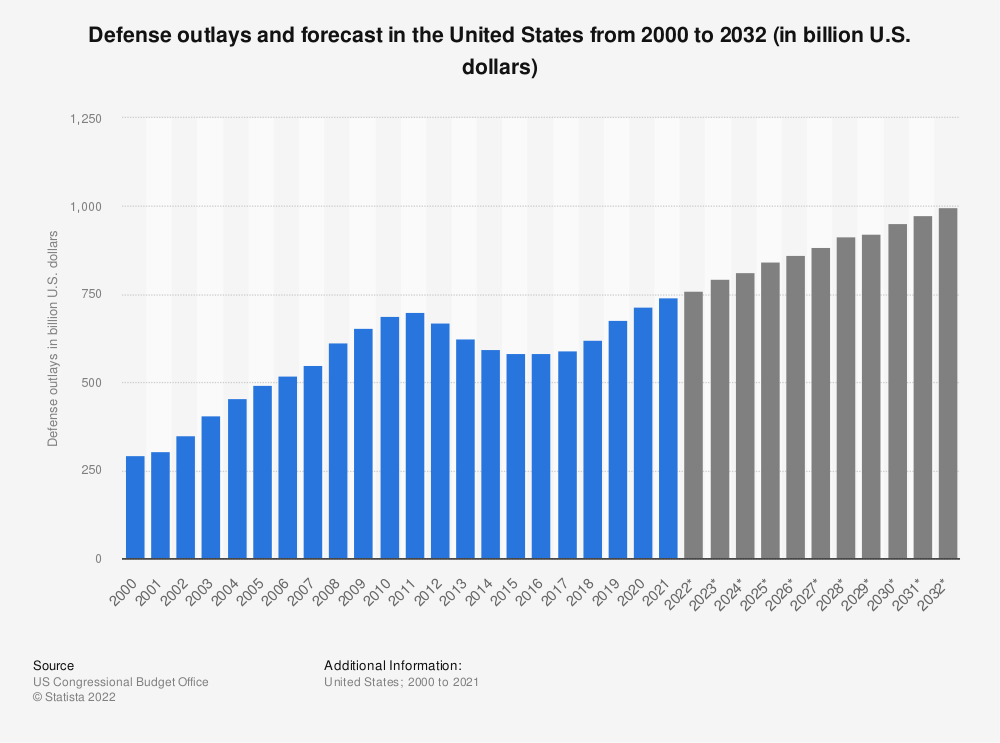 Moreover, in the current environment characterized by geopolitical conflict and tensions, we are likely to see continued increases in defense spending. This week alone, U.S. Senate Democrats included another $12.3 billion in economic and military aid for Ukraine in a must-pass government funding bill, which includes $1.5 billion to replenish U.S. military stockpiles. Some of the weapons that the U.S. has delivered so far have included long-range rocket launchers known as Himars, which were critical in Ukraine's retaking of more than 3,500 square miles from Russia and are Lockheed products.

While there are other defense companies, we prefer the prospects for EPS growth as well as end market and dividend yield exposure offered by LMT shares compared to others. For example, while the shares of General Dynamics (GD)  have smaller dividend yield to those with LMT shares near 2.3%, its Aerospace segment (20% of revenue) primarily serves the business jet market, one that could be challenged as the economy slows. Shares of Northrop Grumman (NOC)  have a fraction of the forecasted EPS growth for Lockheed in 2023 and its dividend yield is 1.5%.

Lockheed breaks its business down into four segments:

Aeronautics (40% of 2021 revenue) includes advanced military aircraft, including combat and air mobility aircraft, unmanned air vehicles, and related technologies. Aeronautics also has contracts with the U.S. Government for classified programs. Major programs for this business include:

The Space segment (18% of 2021 revenue) focuses on satellites, space transportation systems, and strategic, advanced strike, and defensive systems. Customers include the Air Force, U.S. Space Force, Navy, National Aeronautics and Space Administration (NASA), Missile Defense Agency (MDA), and various government agencies of the U.S. and other countries along with commercial customers. In 2021, U.S. government customers accounted for 92% and international customers for the balance.

Despite the long-term outlook for defense and military spending, Lockheed hasn't been immune from supply chain issues and delays, lowering its 2022 outlook in July to $65.250 billion from $66 billion earlier in the year. As we've seen those issues have continued to plague several industries and odds are Lockheed isn't immune. That more than likely means second-half revenue and earnings expectations have some downside even though they have drifted lower over the last 90 days, but we've also seen LMT shares fall from the high of $480 at the outbreak of the Russia-Ukraine war to roughly $400.

From a valuation perspective, that means LMT shares are currently trading at just over 14-times expected 2023 EPS of $27.95 vs. the 15-year average peak of 17.5-times and the respective average low over the same period of 12-times forward EPS. We'd note those P/Es are the average and LMT shares have peaked at higher levels, such as around 2016.

While the consensus price target for LMT shares is $460, we will take the conservative route and trim our view of the 2023 EPS by 5% as well as use a 17-times multiple, given the current environment. That combination derives our $450 price target. From a dividend yield perspective, that $450 target equates to 2.5% based on annualizing the company's most recent dividend payment of $2.80. However, as we noted above, the company is on the verge of announcing its next dividend, which over the last 19 years has meant a larger one. In terms of downside, historic P/E and dividend yield metrics point to $350.

With today's pullback, the risk-reward to be had with LMT shares skews slightly more to the reward side. Given the greater stability associated with defense and military spending in challenging times, Lockheed's position in that industry, and prospects for another dividend increase, we're starting with a small position in LMT shares. As members know, in our view, the September quarter earnings season is likely to be a challenging one for the market, we'll look to use pullbacks in LMT shares to add to the portfolio's position size, especially if it retraces to the $375 level. With that in mind, after actively using its current buyback authorization, Lockheed had $1.6 billion remaining under that current program exiting June. Alongside its annual dividend increase, the company has typically re-loaded its buyback program as well. Given the current landscape and the predictable nature of its business, as we see it, the odds of that happening again are pretty good.