As we discussed in last week's Roundup, we have an abbreviated week ahead of us with equity markets closed on Thursday, Nov. 24 for the Thanksgiving holiday and an early 1 p.m. ET the following day. Despite the shortened session, we have a key piece of economic data coming at us, another round of retail earnings, and Black Friday-Cyber Monday.

All that and the usual scramble associated with Thanksgiving, including some 55 million people expected to travel for the holiday. Typically, this means lighter trading volumes on Wednesday as folks hit the road and again on Friday given the shortened market hours and holiday shopping efforts.

We're starting the week off with China shutting businesses and schools in hard-hit areas as well as tightening rules to enter Beijing in response to climbing coronavirus cases and the first related deaths since May. For Sunday, the country reported 26,824 new local cases, near its daily infection peak in April. The news is weighing on commodity prices, including those for oil, as concern over potentially tighter restrictions would put the latest crimp in place for both supply and demand for the global economy.

Continued strength in the U.S. economy that led the Atlanta Fed's GDPNow Model to call for 4.2% this quarter vs. 2.6% in 3Q 2022 means taking a hard look at the November Flash PMI data from S&P Global (SPGI) when its reported tomorrow.

Does the new order activity support the GDPNow Model?

What does the Flash November PMI report indicate about inflation vs. October?

The answers to those and other questions will factor into the latest thinking about what the Fed is likely to do in the coming weeks but also the first few months of 2023.

As members can see below, given the tight relationship between S&P 500 revenue and domestic manufacturing PMI, what we learn tomorrow could prompt further downward revisions in expectations for 2023. 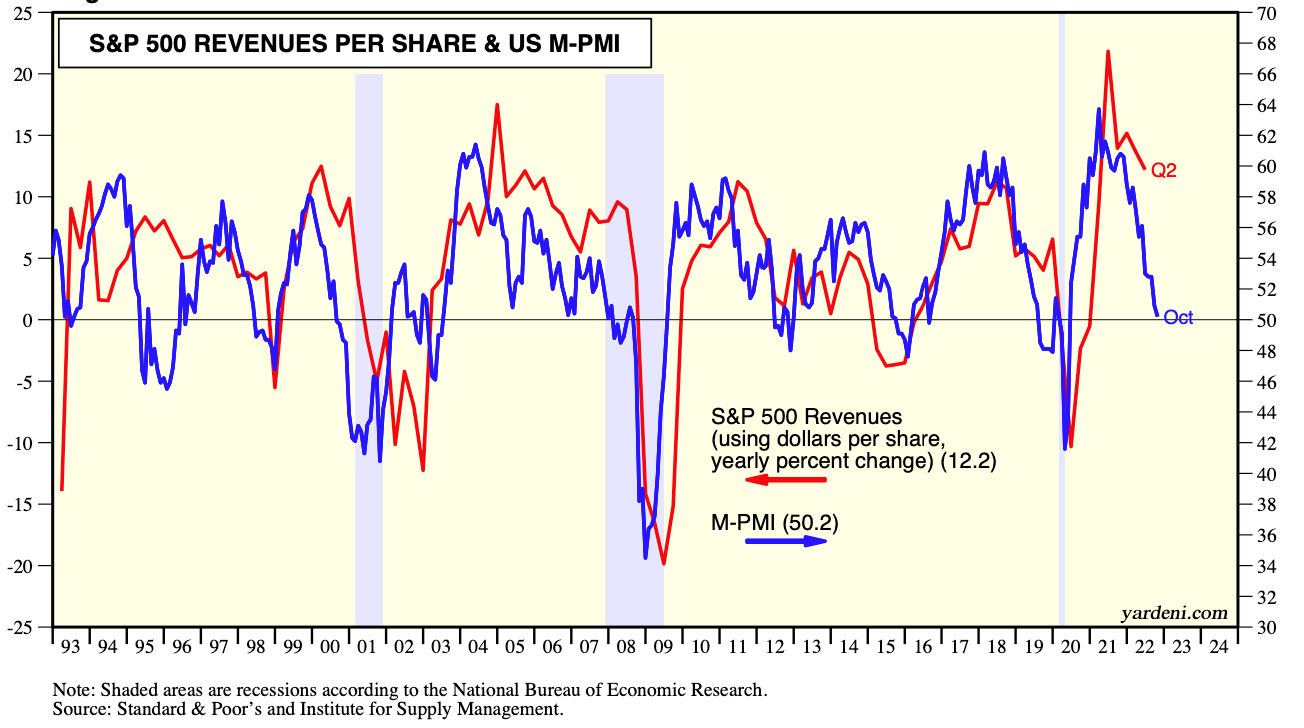 As we think about those expectations, we also have to factor in the renewed issues in China, but also what the S&P Global Flash November PMI report for the Eurozone shows. If we continued to see the data point to a continued contraction in the region, it's another reason to think revenue and earnings expectations for 2023 will need to be revised lower.

As we wait for the market herd to clue into this, we'll continue to remain in a defensive posture with the portfolio, especially given the modestly overbought nature of the market, deteriorating market breadth, and resistance levels ahead.

While today is "All Quiet on the Western Front" when it comes to corporate earnings, tomorrow is another barn burner of a day for retail earnings. That said, this Morgan Stanley (MS) is out with bullish comments on PepsiCo (PEP) , saying the company's accelerated organic growth has yet to be priced into the stock's valuation. Our price target on PEP shares remains $190.

Following comments last week from Ross Stores (ROST) and Farfetch (FTCH) that they see a "very promotional period" ahead as well as Target's (TGT) weaker-than-expected guidance, comments early this week will set the tone for Black Friday-Cyber Monday shopping.

Quarterly results from Best Buy (BBY) will give context to recent Retail Sales reports that showed weak electronics and appliances sales, the declining PC market, and how the latest surge in coronavirus cases in China could impact holiday supply. The answer to how long the current downturn in the PC market may last could come from Dell (DELL) and HP (HPQ) .

Meanwhile, concerns over consumer spending and inventory levels will be a focus for Abercrombie & Fitch (ANF) , American Eagle (AEO) , Dick's Sporting Goods (DKS) , and Nordstrom (JWN) . The risk as we see it is retailer inventories remain at elevated levels entering 2023, arguing for that potential "very promotional period" put forth by Ross Stores and Farfetch.

As those results and holiday guidance are collected, they will be sized up against shopping expectations for the post-Thanksgiving weekend. The Mastercard (MA) SpendingPulse forecasts Black Friday sales will rise 15% year over year due in part to a boost in foot traffic.

One area Mastercard sees reaping the benefits on Black Friday include companies like Macy's (M) and Dillard's (DDS) as it forecasts department store sales will be up nearly 25% year-over-year. Foot traffic and higher prices vs. this time last year are expected to drive a 35% year-over-year jump in restaurant sales during the Black Friday weekend. We see Chipotle (CMG) being a prime beneficiary as consumers continue to shun casual dining options in favor of more affordable fast casual and quick service dining options.

Cyber Monday, which lands on November 28, is expected to book sales of $11.2 billion this year, up more than 5% compared to last year. Given the confluence of factors hitting consumers, including layoffs, inflation, and higher borrowing costs, we suspect they will return to digital shopping in force this year.

The National Retail Federation sees e-commerce sales rising 10%-12% this year, a quicker pace than the 6%-8% increase in total holiday retail sales this year. Some are skeptical of that forecast, and a recent survey conducted by Goldman Sachs (GS) found 43% of respondents plan to spend less this season than last year.