US equity futures here on Tuesday point to stocks giving back some of Monday's gains. Soon after the market open S&P Global will publish its Flash January PMI data, which investors will be chewing on to find what the report reveals about new order growth for the manufacturing and services economies and to gauge prospects for a short and shallow recession. As Chris discussed with Todd Campbell on this week's AAP Podcast, he'll be watching the new order data and what those numbers have to say about what's next for both sectors of the economy.

We also have a renewed surge in the pace of corporate earnings this morning. Diversified giant 3M (MMM) missed expectations for its December quarter, issued downside 2023 guidance as it expects macroeconomic challenges to persist, and announced cost-cutting measures, including sacking 2,500 manufacturing jobs. General Electric (GE) also issued downside guidance for 2023 this morning after reporting mixed results for its last quarter of 2022.

After today's closing bell, we'll hear from Microsoft (MSFT) , the first of the Big Tech companies to report. Comments on the PC market, cloud spending and how Microsoft looks to leverage Chat GPT across its portfolio suite not only will be of high interest to us about MSFT shares, but those comments have the potential to reshape the market's expectations for what will be said by other tech companies in the next few weeks. While we expect cautionary comments about the PC market and the larger macroeconomic backdrop, one potential tailwind for Microsoft is the continued retreat in the dollar. 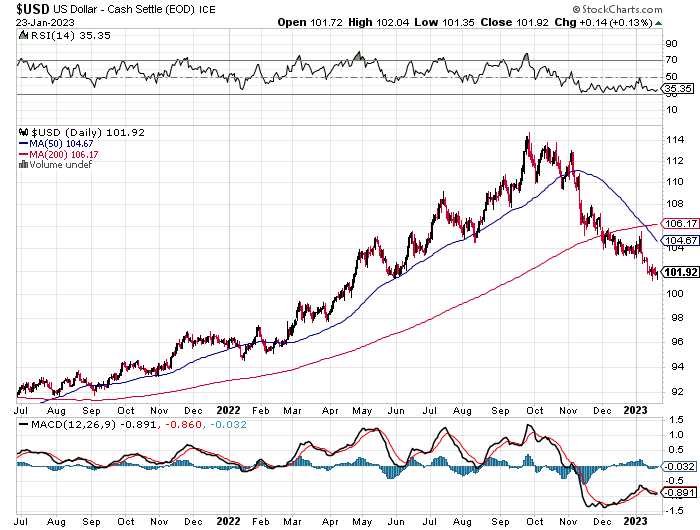 While the dollar is still a headwind on a year-over-year basis, the ensuing drop since peaking in late September has softened its impact compared to the second half of 2022. With the European Central Bank expected to deliver two back-to-back 50-basis point rate hikes versus slower moves by the Fed, we could see more downside ahead for the dollar. That would be a positive not only for Microsoft but other portfolio companies with meaningful international exposure such as PepsiCo (PEP) and McCormick & Co. (MKC) and both Applied Materials (AMAT) and Coty (COTY) in the Bullpen. Needless to say, we'll be looking to see what Microsoft says about the dollar after today's market close.

Before we get there, we have quarterly results out this morning from Verizon (VZ) and Lockheed Martin (LMT) . Lockheed delivered a nice beat on both the top and bottom lines for its December quarter while its guidance bookends the consensus forecast for 2023. Verizon also delivered better-than-expected December quarter results that included strong wireless service revenue growth, but the company guided its 2023 numbers below consensus expectations. We'll have more on both positions after we digest their earnings releases and listen to what the management teams have to say on their respective earnings calls later this morning.

On a positive note, our shares of Chipotle Mexican Grill (CMG) were initiated with an Overweight at Wells Fargo and a price target of $1,800 vs. our $1,850 target.

As we get ready for the Flash January PMI data for the US, here's a roundup of the other Flash PMI data published this morning from S&P Global. In sum, it points to the continued slowing of the global economy.

The au Jibun Bank Flash January Manufacturing PMI for Japan stood at 48.9 in January, unchanged from December's 26-month low and below market expectations of 49.4. The Flash January Services PMI increased to 52.4 from a final reading of 51.1 in December, remaining expansionary for the fifth consecutive month.

The GfK Consumer Climate Indicator in Germany rose to -33.9 heading into February from a marginally revised -37.6 in January and the market forecast for -33.0. Despite the continued negative figures, the February reading was the highest since August 2022, likely due to the fall in energy prices.

Preliminary estimates from S&P Global show the Eurozone Manufacturing PMI increased to 48.8 in January from 47.8 the previous month and above market expectations for a reading of 48.5. New orders decreased at the slowest rate since last May, albeit still declining sharply; and employment accelerated. Turning to the Flash Service reading for January, it rose to 50.7 from 49.8 the month prior, coming in ahead of the 50.2 consensus.

The preliminary S&P Global/CIPS UK Manufacturing PMI increased to 46.7 in January from 45.3 in December, beating market forecasts of 45.5. The flash January data pointed to a sixth consecutive month of falling factory activity but the smallest drop since September. The preliminary take on the January Services PMI fell to 48 from 49.9 in December, the lowest in two years and below the expected 49.7.